As I sit and enjoy breakfast at the border viewpoint, looking over the countryside divide between the ancient civilisation settlements of Edinburgh in Bonnie Scotland and Newcastle in Northern England, once the sites of many a battle between the two kingdoms, I can’t help but take in the breathtaking views on a sunny day like today and reflect on the last couple of weeks leading up to the race last weekend.

As I sit and enjoy breakfast at the border viewpoint, looking over the countryside divide between the ancient civilisation settlements of Edinburgh in Bonnie Scotland and Newcastle in Northern England, once the sites of many a battle between the two kingdoms, I can’t help but take in the breathtaking views on a sunny day like today and reflect on the last couple of weeks leading up to the race last weekend. 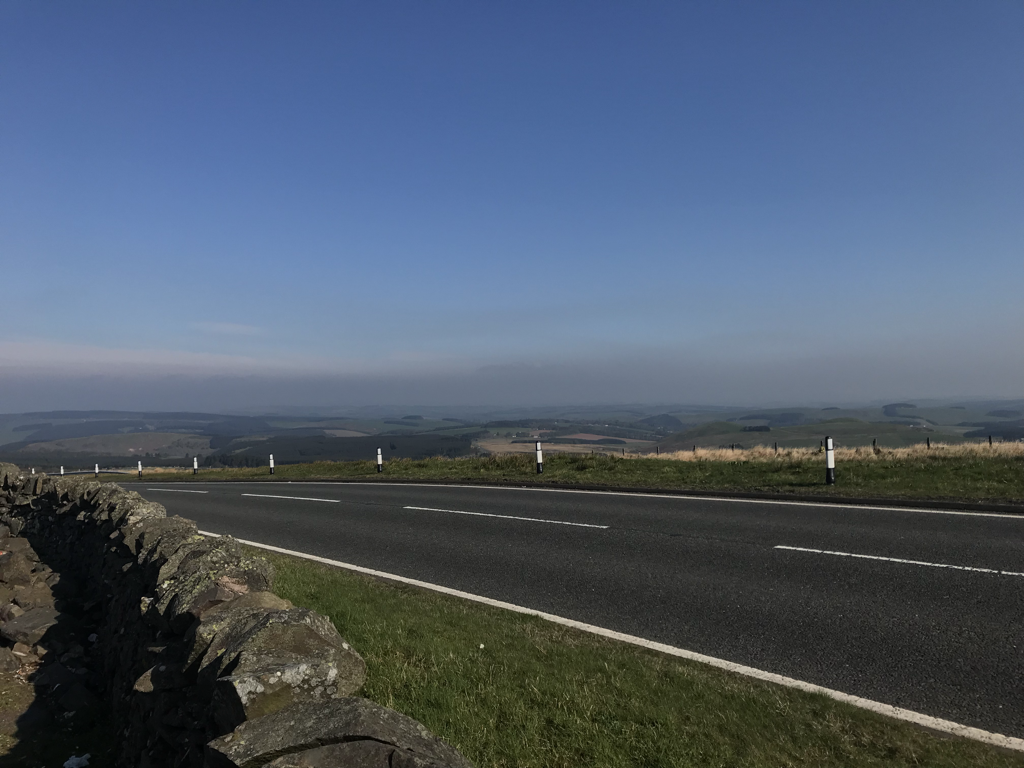 Preparations all began a couple of weeks ago. Racing well on the back of strong performances at Anglian Water Duathlon, Bedford National Championships and my local race at Durham Duathlon, I was due to be lining up on the start line in the standard event at Stockton which was a 2019 Qualifier for the European Championships, and another great local race on closed roads.

As I had a weekend off racing the week after Durham and week before Stockton, I had some tough sessions planned to build my fitness back up again, one of which consisted of a race pace run off the bike. A session which was to be 2.5 hour hilly turbo. Everything was going well on the bike and I was feeling strong. Then I got on to my feet. Around 2km away from home I felt a sharp pain in my calf. In the region of a previous injury I took no risks and decided to walk home. 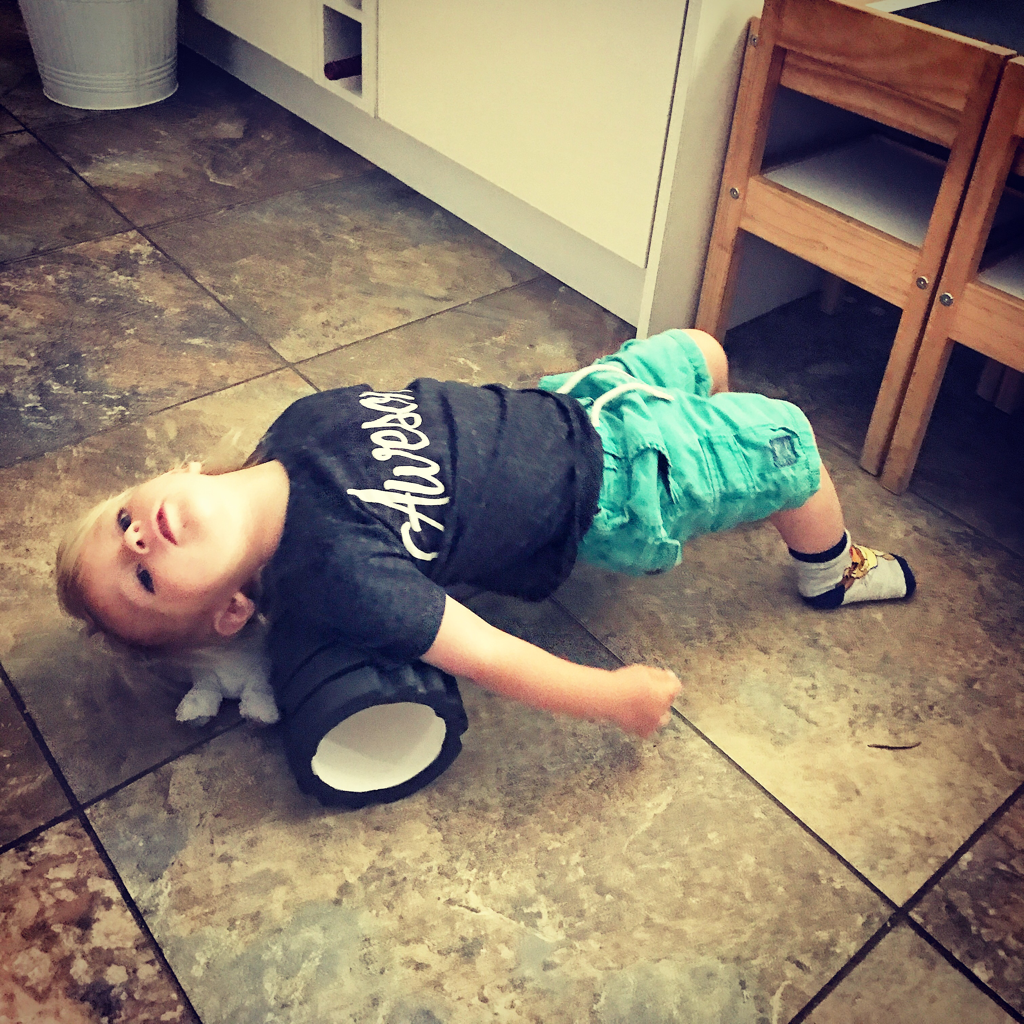 The usual rolling and icing followed and as I was still feeling a little discomfort the following day, I decided I wasn’t going to run until I was on the start line at Stockton.


Three days later I tried a run session on the back of a bike warm up and was still feeling the effects of the injury. I made the decision at this stage to withdraw from Stockton Duathlon and rely on cycling and swimming sessions to get prepared for the rearranged Clumber Park Duathlon another week later. It’s always a tough decision to make but because I had already qualified for the Standard Distance Euro Championships 2019 following Anglian Water, the safe decision was made to give myself longer to heal and protect from further injury.


Still working hard in the water and on the bike, withdrawing from Stockton was the best decision I’d made.


Leading us into the final prep week before Clumber Park, a race I had targeted from the start of the season to qualify for the 2019 European Championships at Sprint Duathlon in, I needed to make another test run to see if it would be worth me travelling down to Nottinghamshire, or whether I should nurse it for another week before the Triathlon season starts. The run went well! I did not seem to have anything underlying causing any discomfort, although I hadn’t ran at full speed, I felt good enough to toe the line on Saturday. 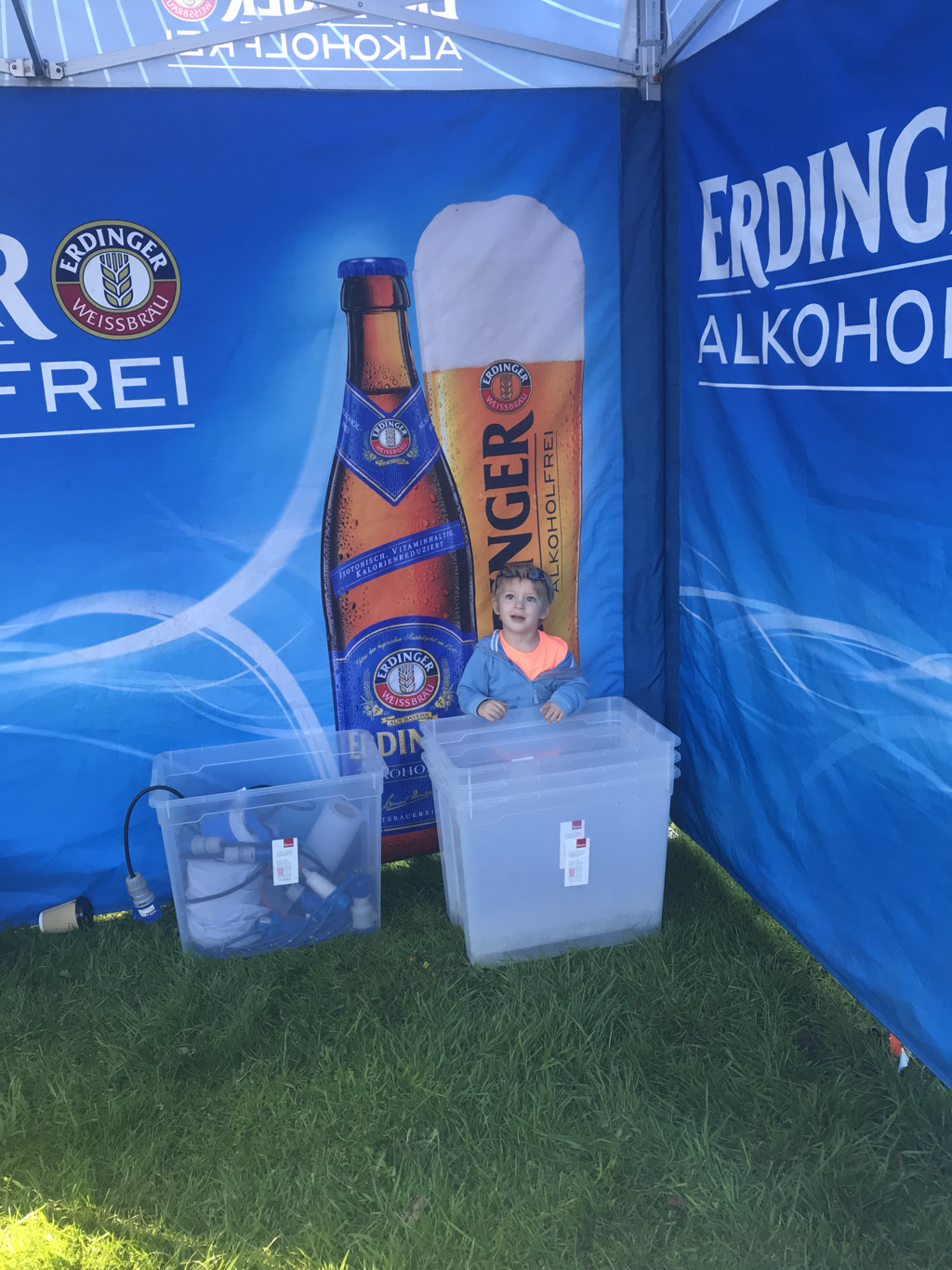 Fast forward to race day. As usual I arrived at the venue nice and early to ensure I was fully prepared and leaving nothing to chance I had checked and double checked everything. Heading straight to the Erdinger Tent I met with a familiar face in Karl Alexander who was there to distribute the post race refreshing Erdinger to the finishers and left my kit there while I proceeded to registration.


Another seamless procedure put on by One Step Beyond events, before I knew it I was wheeling the bike into transition to rack it up. Racked next to a familiar face and ex club mate in Matthew Turnbull, it was nice to have some distracting conversation to any pre race stresses. Now as this was a sprint event, nothing was required to be left around the bike ensuring minimal clutter. To many people make to much of transition taking a picnic with them and a complete change of clothes! I was fed and watered and only required to carry a small half full aero bottle on the frame with ELIVAR Hydrate electrolyte to wet my lips and replace any sweated out salt. The only addition to my bike in transition was the usual Duathlon spare pair of racing shoes incase I have an issue with the racers I’m wearing in the first run.


All that is left now is for a suitable warm up. Beginning with a light jog, I was a little nervous incase the leg went. Had I let it heal enough? Was it going to go on me just now, just before the race start? But the answer was to be no. Everything still felt well and I needed to regain my confidence that it would hold out on me 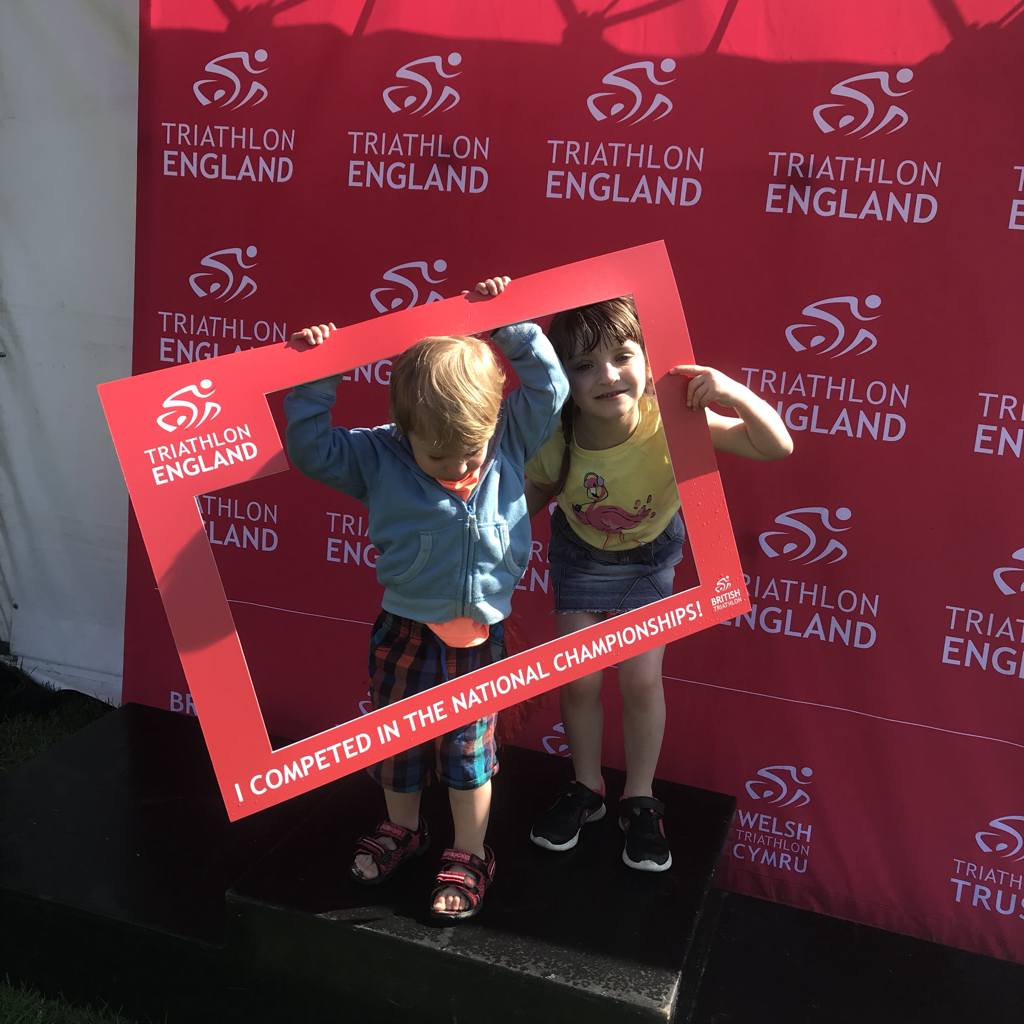 Arriving at the start line just as wave 1 had started, I knew I had 2.5 minutes to go before I set off. Again, in a familiar position on the front of the line, we were all poised and ready. Wave 2 was not so bad at all, it did offer us as athletes something to chase down when the tail Enders of wave 1 were in sight however would be difficult to judge positions until the results were out at the end.


I was running well I settled into a comfortable pace on this undulating course which seemed more like a drag up to the half way turn point at 2.5km. Before the turn we could see the leading athletes coming back from wave 1 and we were all starting to get mixed up now, I counted myself 32nd around the turn from a mixture of groups and was still gradually picking athletes off. I had company now. Matthew was on my shoulder. I didn’t turn round but I’ve raced against him many a time I know the accent of his breathing. I knew he would try to push on so I lifted the pace to keep it high at a Tempo I knew I’d be able to ride well off. 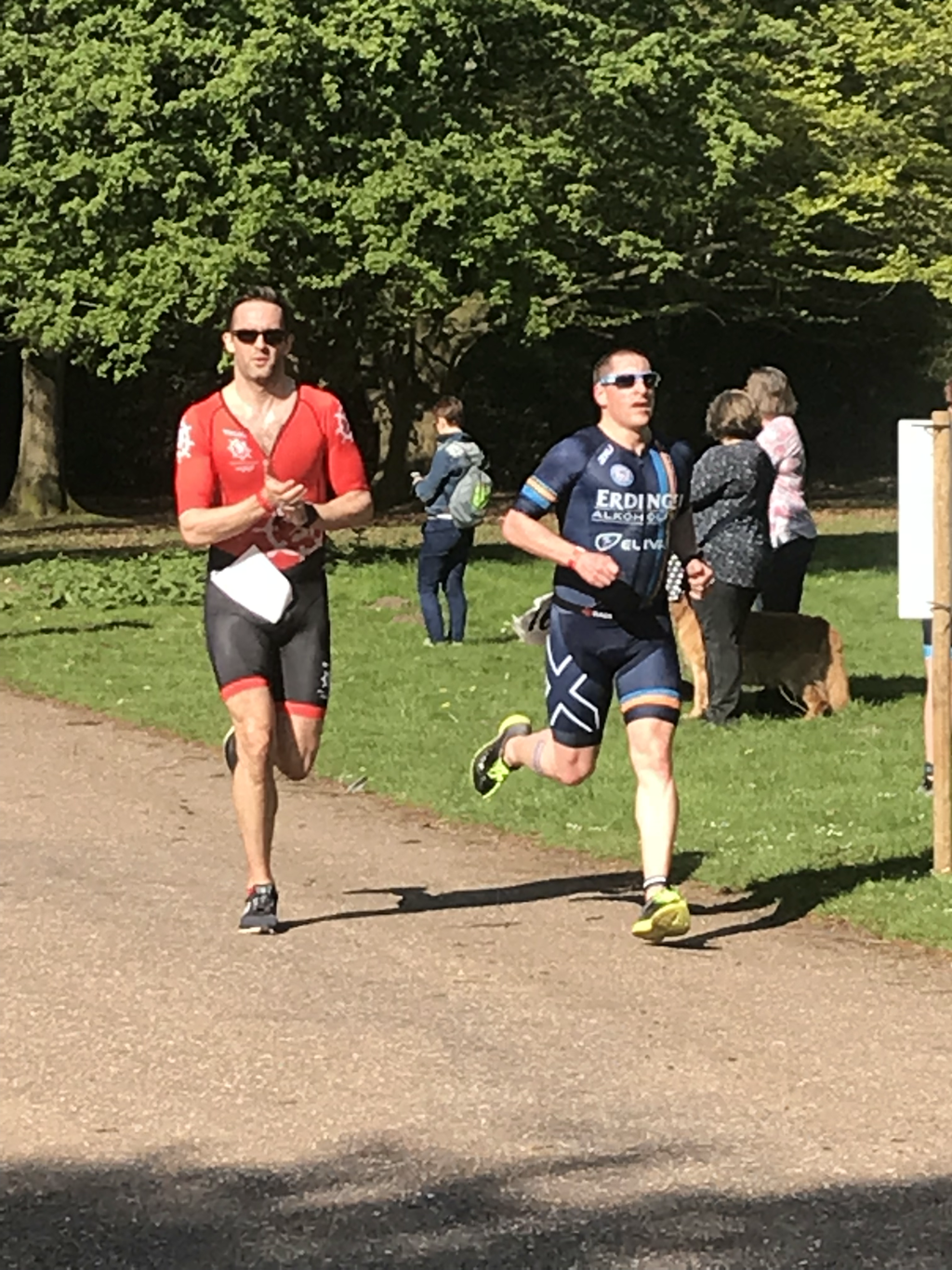 Approaching transition I had counted back from those we had over taken and was now up to 27th coming in from the run. We both travelled through transition together and found our bikes, probably relying on each other as markers. Fumbling with my visor, we headed out with Matthew slightly ahead into the coned off neutralised section before we left the park.


Now to see if all the hard work had been paying off....


.... I did, I rode strong and as we left the park climbing out to the back end of the course, I was found to be picking off the faster runners ahead of me and also Matthew included. I never saw him again and continued to ride hard until I returned back to the park. I knew I was having a good ride as I had clear roads ahead and my father shouted up to 5th as I approached the dismount line. Confirming this with a quick glance around transition I was straight into my race shoes and retracing my steps on the final 2.5km run! 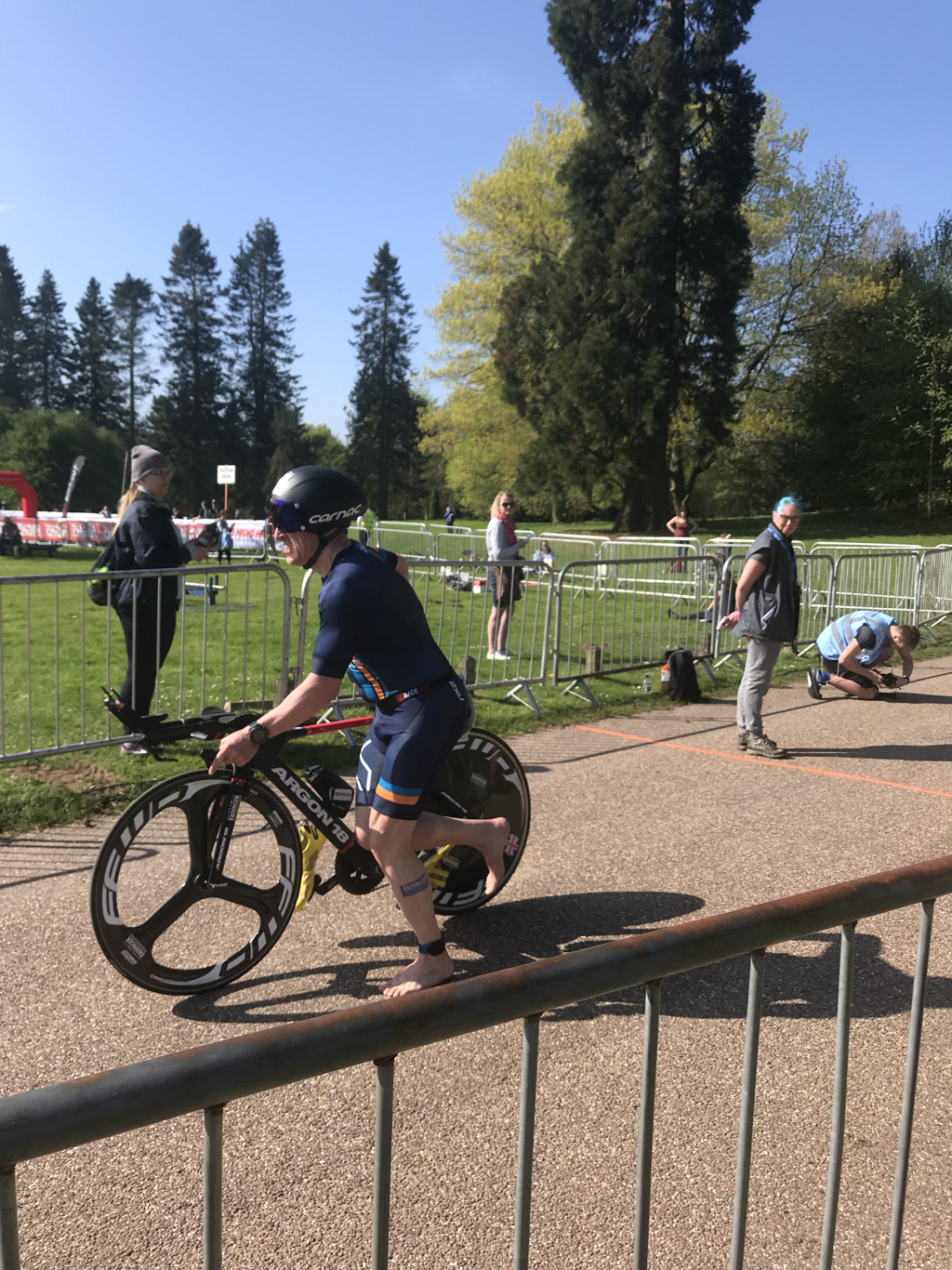 I just needed to keep the pace high enough not to give any places away and stay strong. Running away from transition I approached the end of the lap from the standard race and this proved to be a blessing in disguise. Not only was I to get lost in the crowd but I also used the fresher athletes to pace me to my turn point. At the turn it was all downhill home. I had to stay strong and not labour. Stay light! Keep the legs turning over. I was passed, I couldn’t work out the number but I took no risks. I stayed with him for around 500m and he put in a spurt! At first I stuck to him like glue but then the elastic snapped as we approached the last 200m Sprint. Finding myself huddled around in a small group over the finish line, Dad told me I was 6th over the line which included guys from the first wave 2.5 minutes ahead of me.


Straight after this, dad went to get my splits from the timing tent and came back with a list of penalties for people drafting on the course. Now I have no sympathy for drafting penalties as this can be avoided! You simply keep your distance. You pass through quickly and maintain your pace. If someone passes you you don’t accelerate to sit on the wheel you simply have to drop back or go past and drop them. 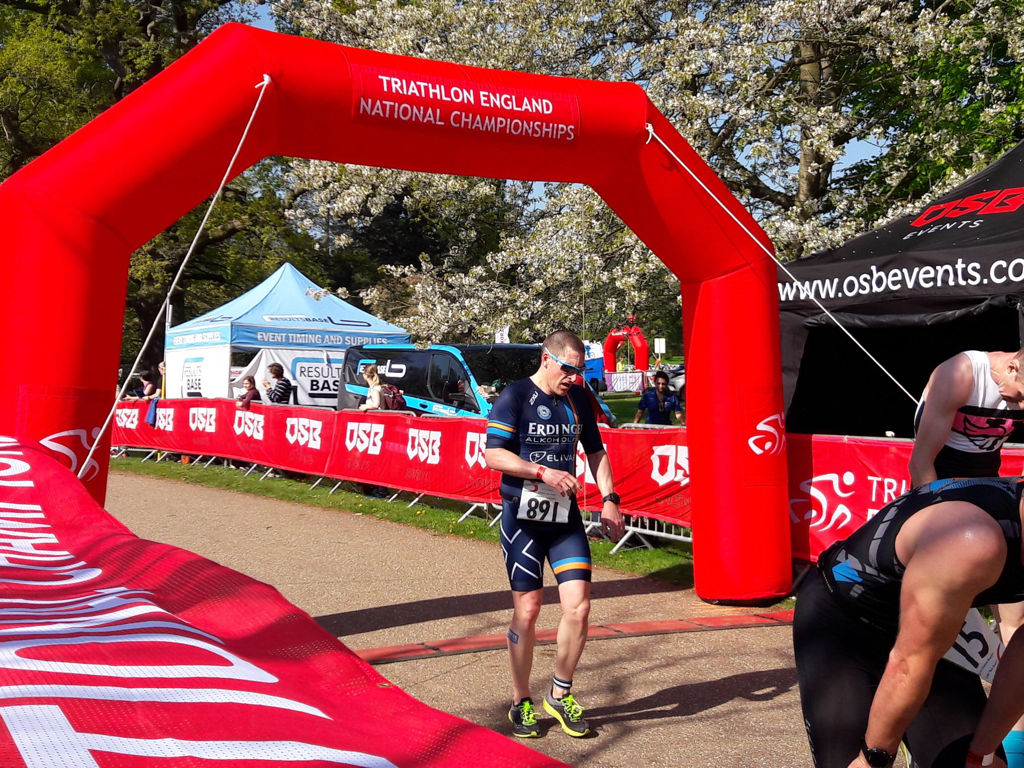 The guy who passed me just before the finish turned out to be in my age category he got caught for drafting and received a one minute penalty (in my opinion 1 minute is not sufficient as a drafting penalty but this is a different story for a different day). I was escalated to 5th over the line but corrected results taking the 2.5 minute wave start into consideration boosted me to 2nd place (1st age group) missing out on the overall win by 30seconds.


To that end I’m happy, it’s all coming together and I’ve continued my 100% start to the season with podium finishes. 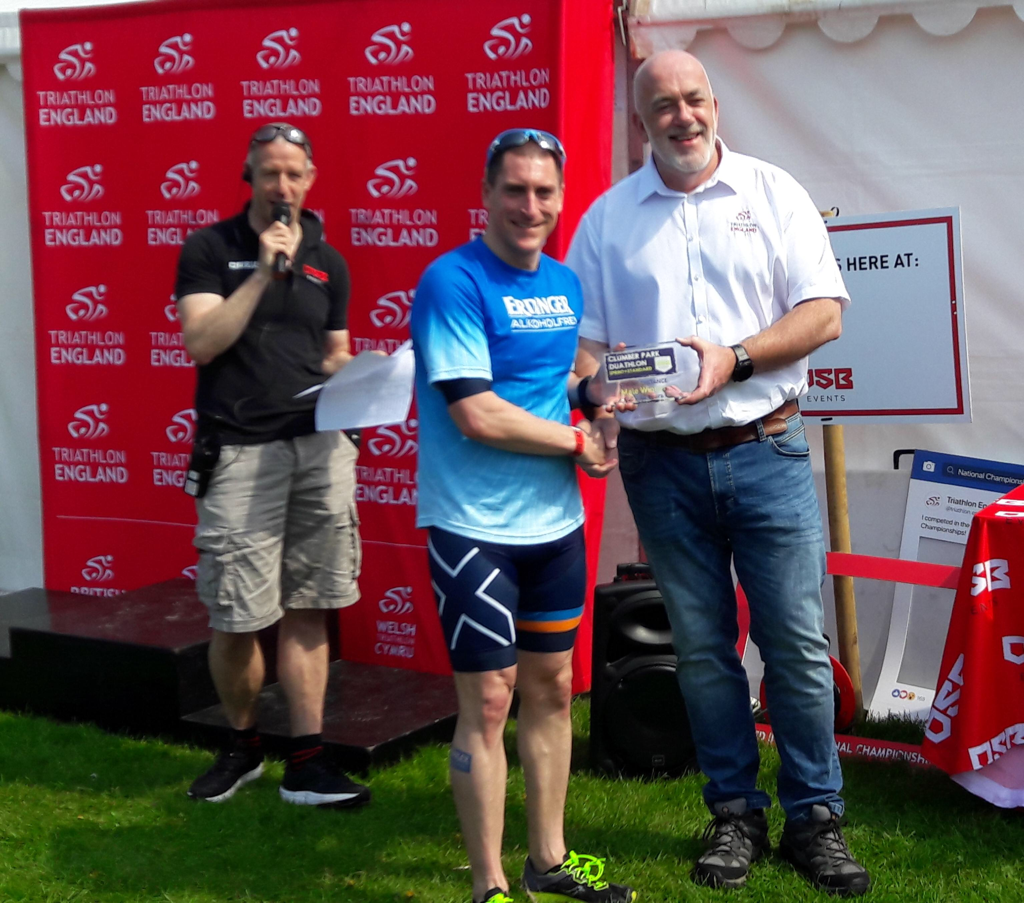 
Now all focus is on this weekend and the next few weeks where Triathlon makes its return, beginning with St Neots Standard this Sunday which is a race I punctured in last year 2 mile from transition and is a European Championship Standard Distance Triathlon Qualifier for 2019 and then next weekend we are back down south to Eton for the first “Draft LEGAL” sprint race which is a World championship qualifier for 2019.


Thank you all for taking the time to read this update, and I’ll finish off by saying thanks to all the family, Charlotte Freya and Arlo for always being there to support me and provide the biggest voices I hear on race day. Mam and Dad for always supporting whether they are there or not. Coalfields Tri Club, my athlete family whom I get a great deal of motivation from seeing you all achieve everything you set out to do.


To Team ERDINGER Alkoholfrei,
RACE SKIN for my kit which I will now share with you,
ELIVAR for keeping me hydrated, AQUASPHERE for keeping me warm and buoyant when wet,
FASTFORWARD Wheels for giving me confidence to go fast on the bike #getconfident #gofast
And 2XU compression for helping me recover and stay on the best possible form I can. 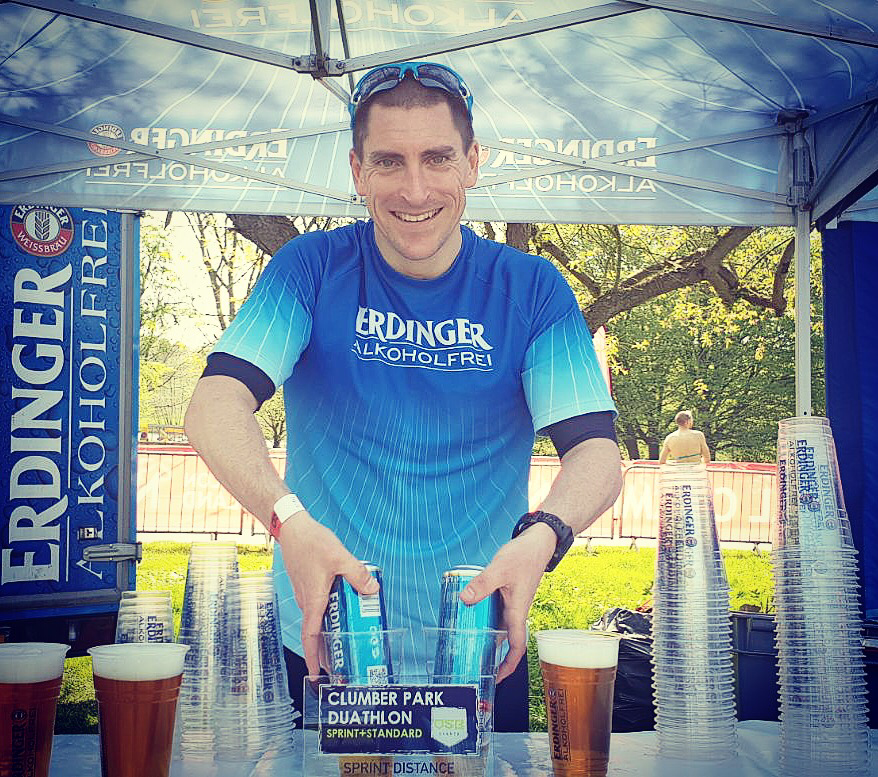 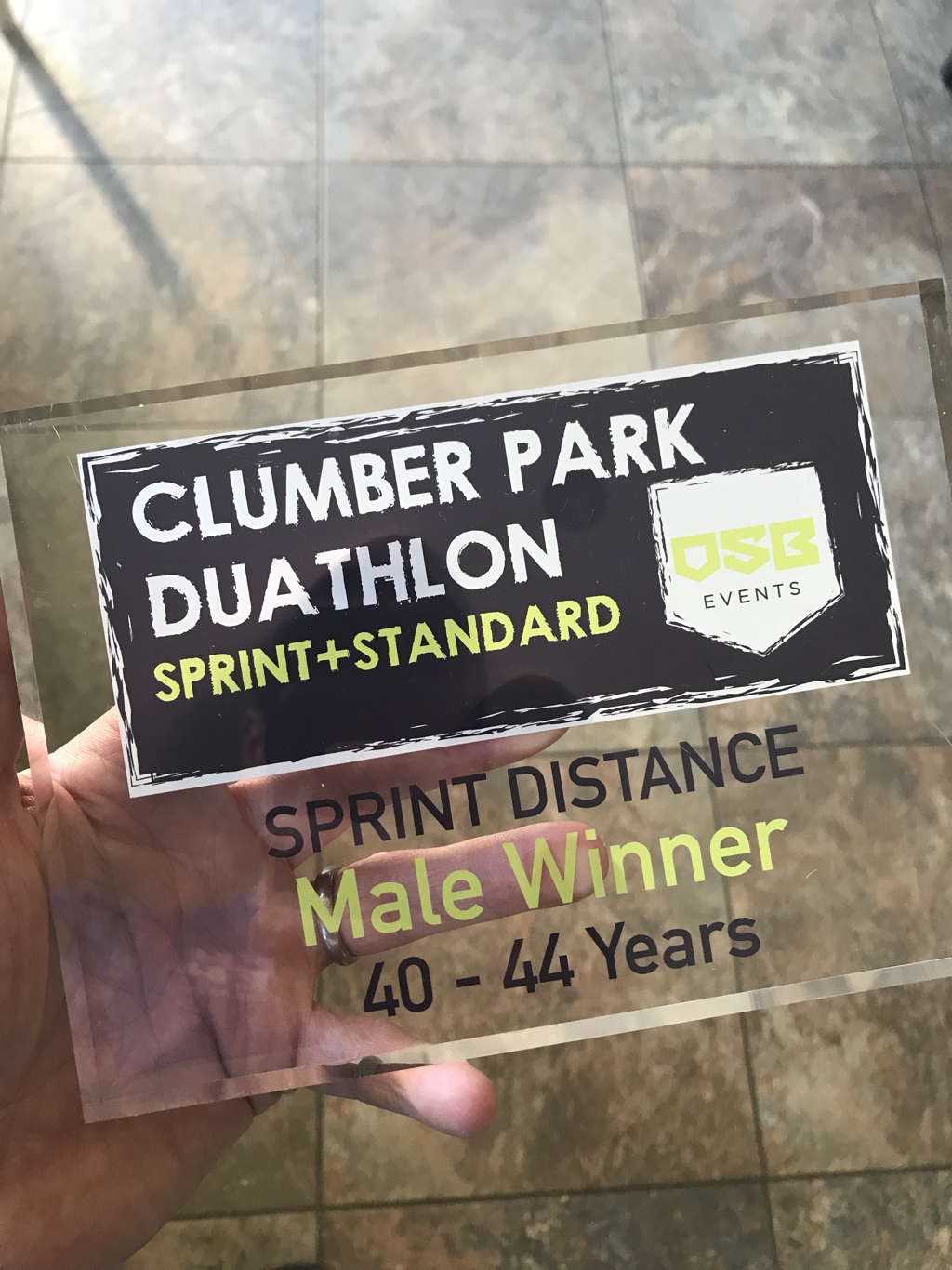 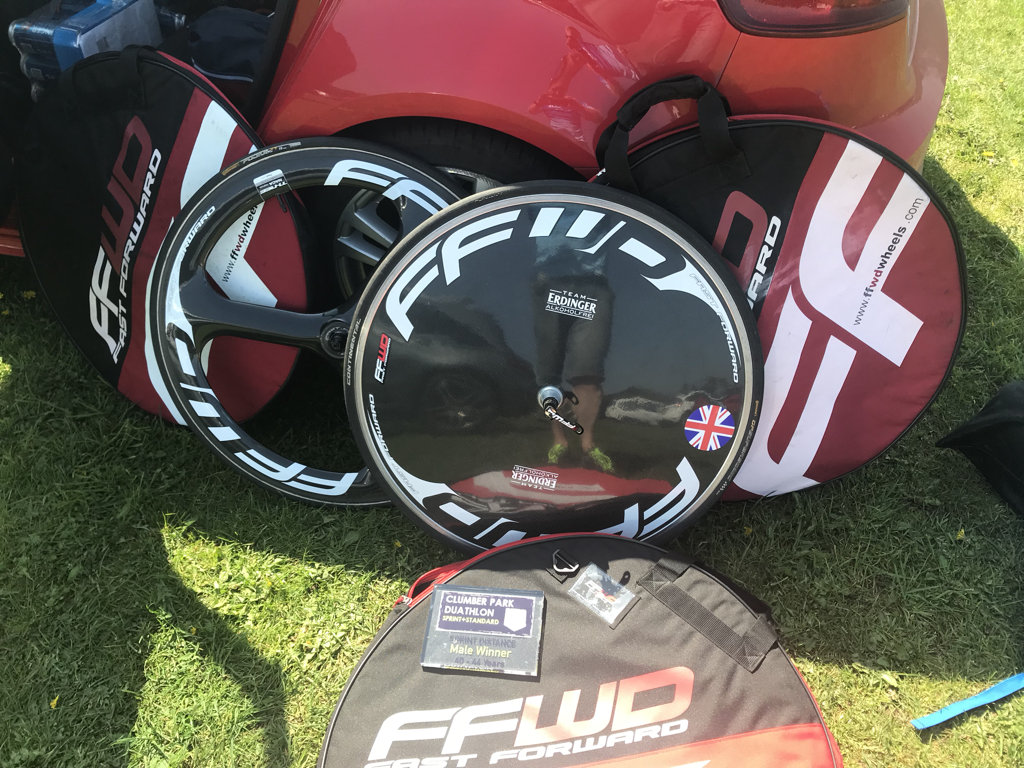 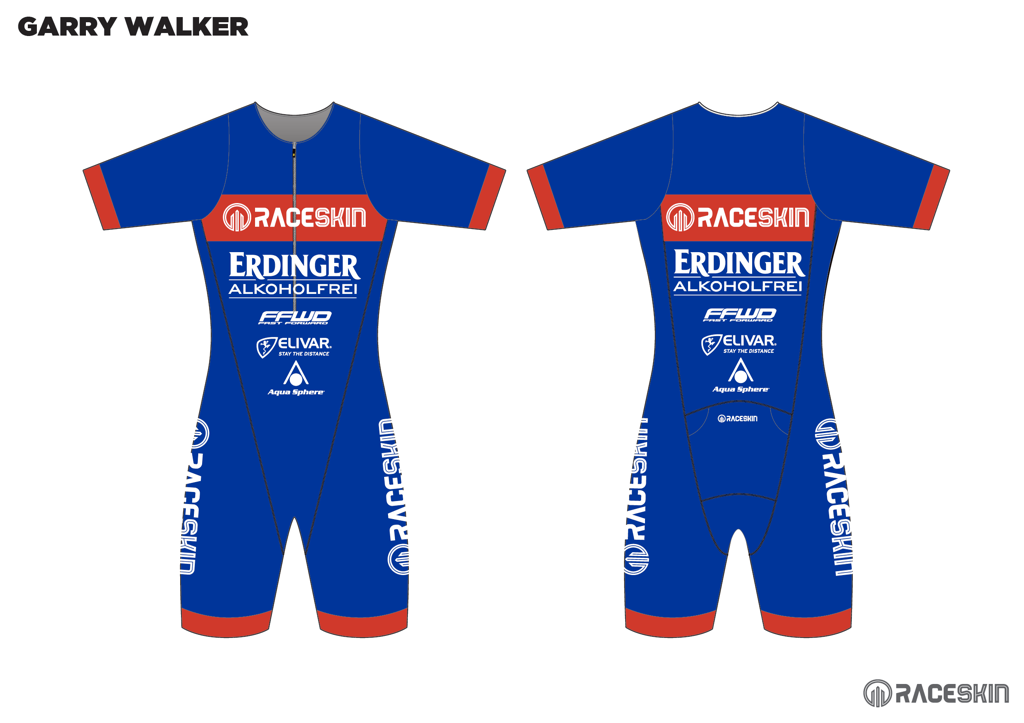