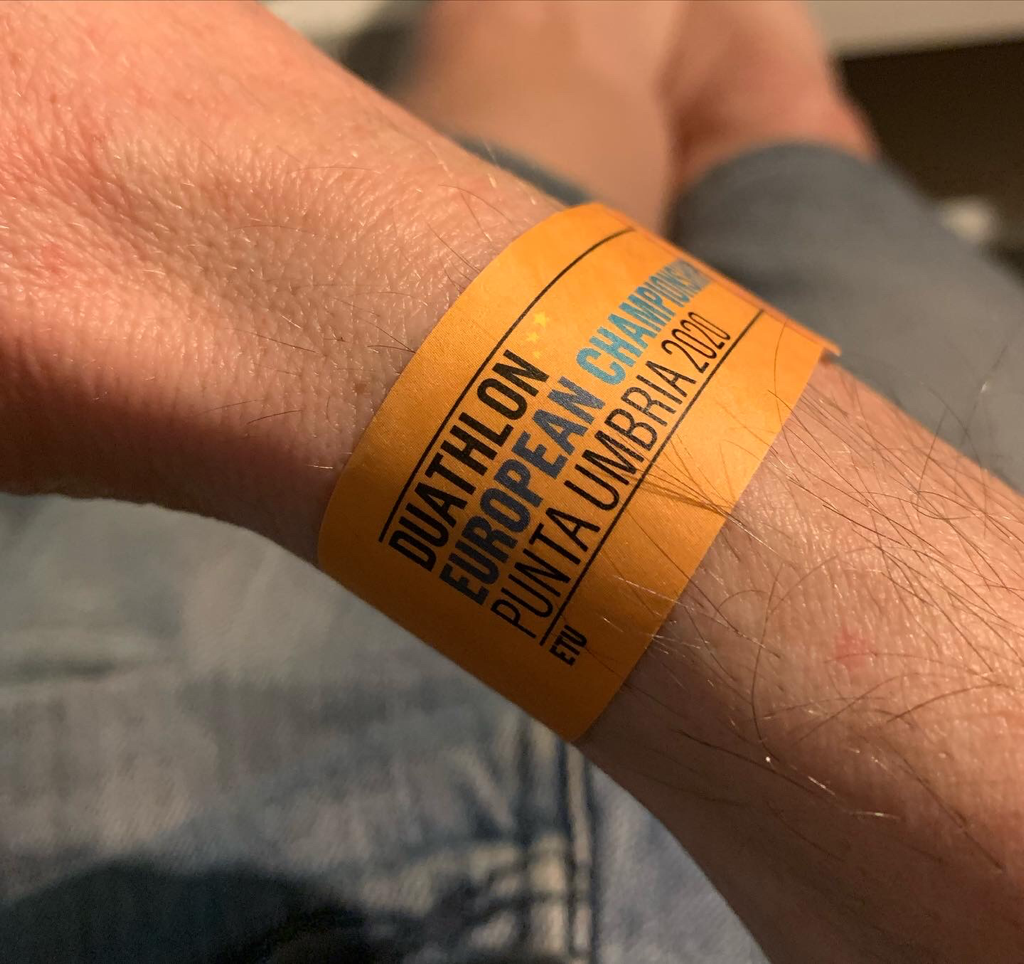 Leeds Castle, Kent, is a long journey from County Durham in the North East of England. Some six hours drive made all so much more worthwhile when you arrive at the beautiful picturesque venue. 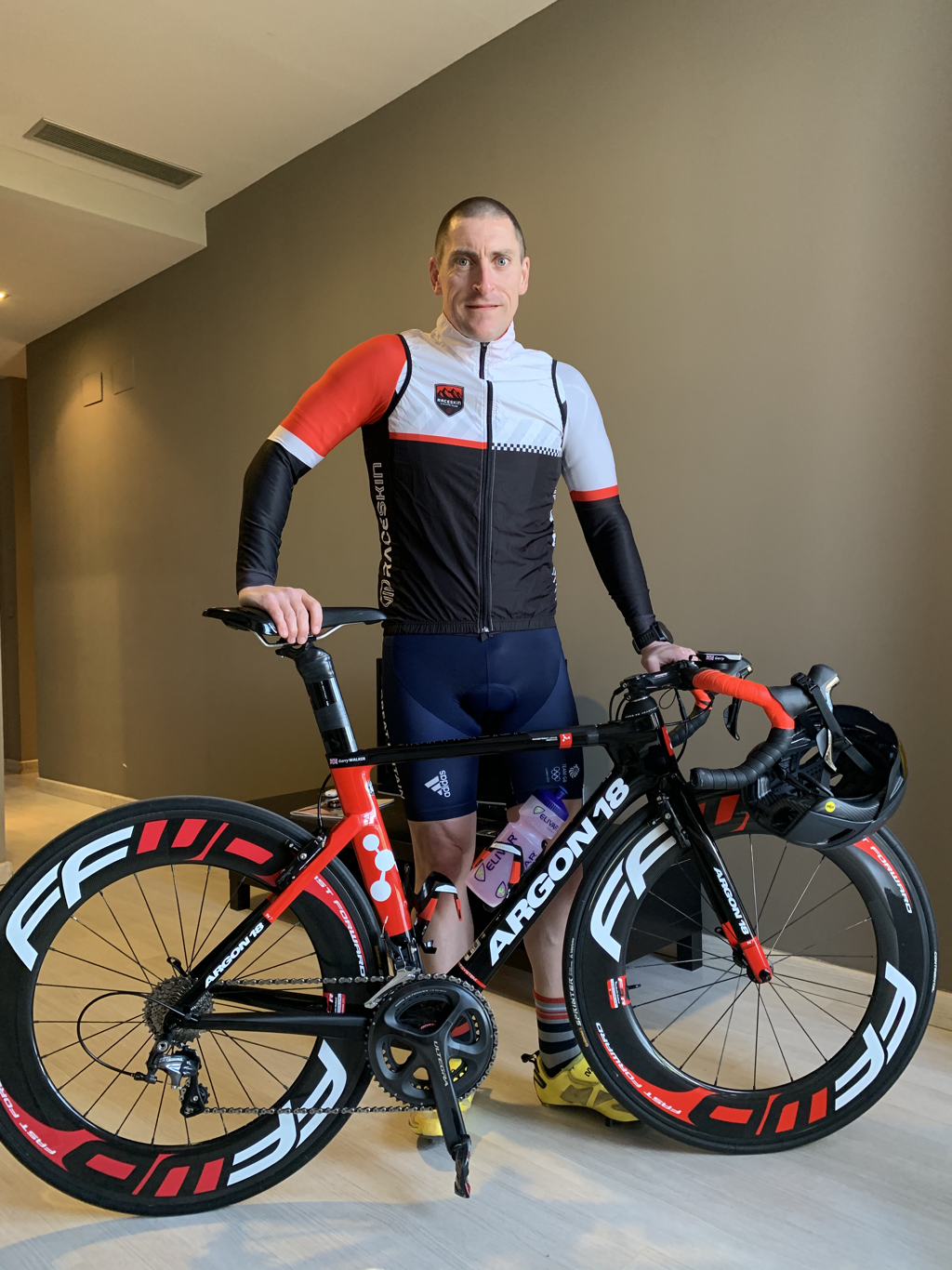 A race organised by a very good friend, one of many friendly people I’ve met since I’ve been playing Triathlon. Jon Bond and I were both ambassadors for A1 Multisport store while it traded and being at opposite ends of the country, had never met until we raced the European Middle Distance Championships together at Challenge Paguera in Mallorca in 2015. Jon saved my race that day and you can read about it in a previous blog further down this page. We remained in contact ever since and this was the second time I had supported his race by not only competing but giving a little something back by helping to marshal other races at the same event! 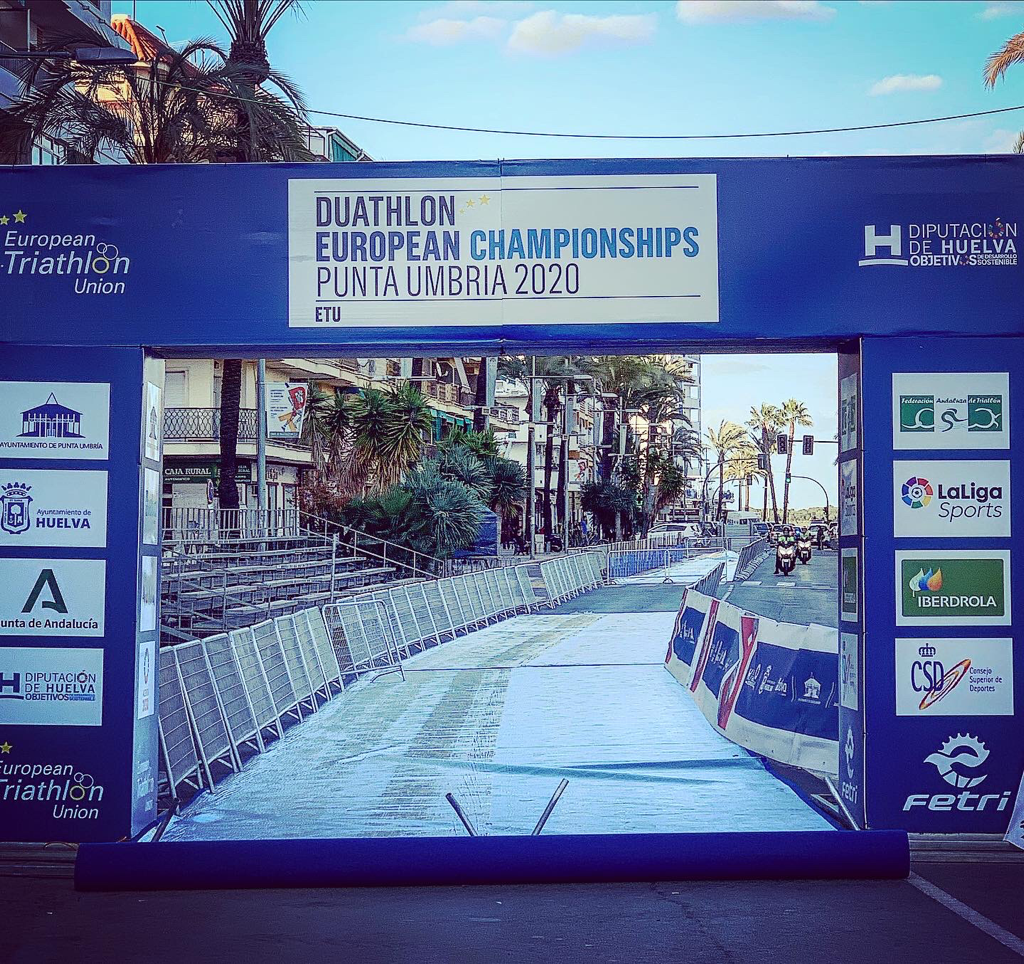 During the week leading up to the race, my worst nightmares were looking likely with water temperatures in the relatively shallow moat surrounding the castle soaring due to the beautiful weather conditions we have been experiencing of late. Reports of a potential non wetsuit swim were looking ever more possible. My wetsuit has always been my safety blanket and the thought of any swim without it did not sit nicely with me.

Waking up on Sunday morning after a comfortable night sleep at Jon’s house, today was the day, the last opportunity I had to qualify. I had put my eggs in the basket of this race as it fell on the same day that the second draft legal sprint qualifier was held in Cardiff. I’d chosen Eton a couple of weeks ago instead for that event with my backup being Redcar again later in the season and from my results I’d made the right decision

It was a beautiful morning. And the sun was shining. The usual rule of not trying anything new was going to be ripped up and flushed down the toilet. The new RaceSkin kit had arrived and I wasn’t passing up on the opportunity to peel it on. It fitted like a glove and felt super comfortable. Arriving back at the castle all ready to race, temperatures were recorded very close to borderline and optional wetsuit swim had been announced! No option for me at all, I was happy to sweat it out all covered up in the beating heat while we listened to the race briefing.

As the first two waves had started to exit the water, we found ourselves lining up on the stony beach ready to race into the water like we were about to storm the castle. Unusually I’d found myself right in the centre on the front line. A slight pause before the gun and we were on our way! It was like the start of a winter season cross country race! Elbows sharpened as we charged into the water. Running until it was deep enough to be submerged, my timing to dive was obviously a popular one!!!

Nothing could stop me from taking evasive action from diving right into the back of the guy who had dived under me right across my line. This was just the start of events to come! the swim was the most physical scrap I’ve had in some time I’m sure some of them were wearing mixed martial arts gloves. I took a thump in the back of the head, I got dunked at the buoy, someone pulled my ankle back and felt like they tried to rip my chip off!

Oh and to top it all off I experienced what can only be described as an attempted humping from behind when someone rolled over the top of me to swap sides!

I felt violated but it was all worth it. Recently I’d increased my swim volume and it started to pay dividends. After what seemed like a water polo swim to the first buoy, thanks to Jonny Carlisle for the practice, although I hadn’t said that it the time, I’d settled onto some faster feet and into a smooth stroke. Lap two became far more comfortable and open. I left the water in 8th position with a 25 minute swim, it measured long and was easily a couple of hundred meters at least longer than expected. 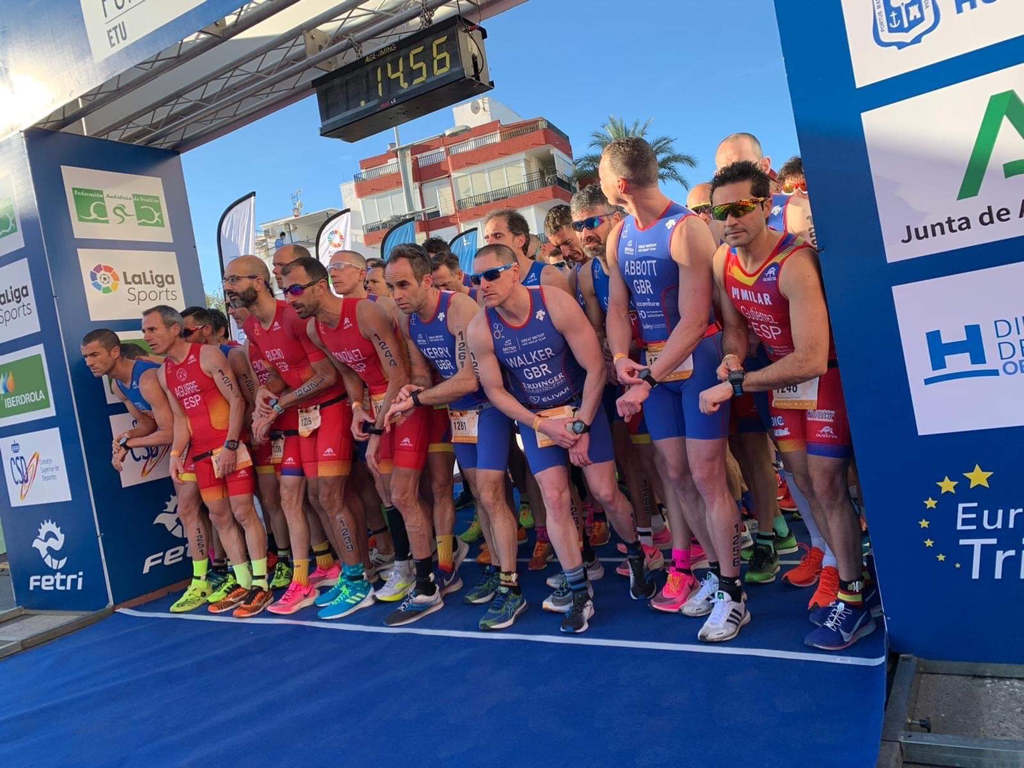 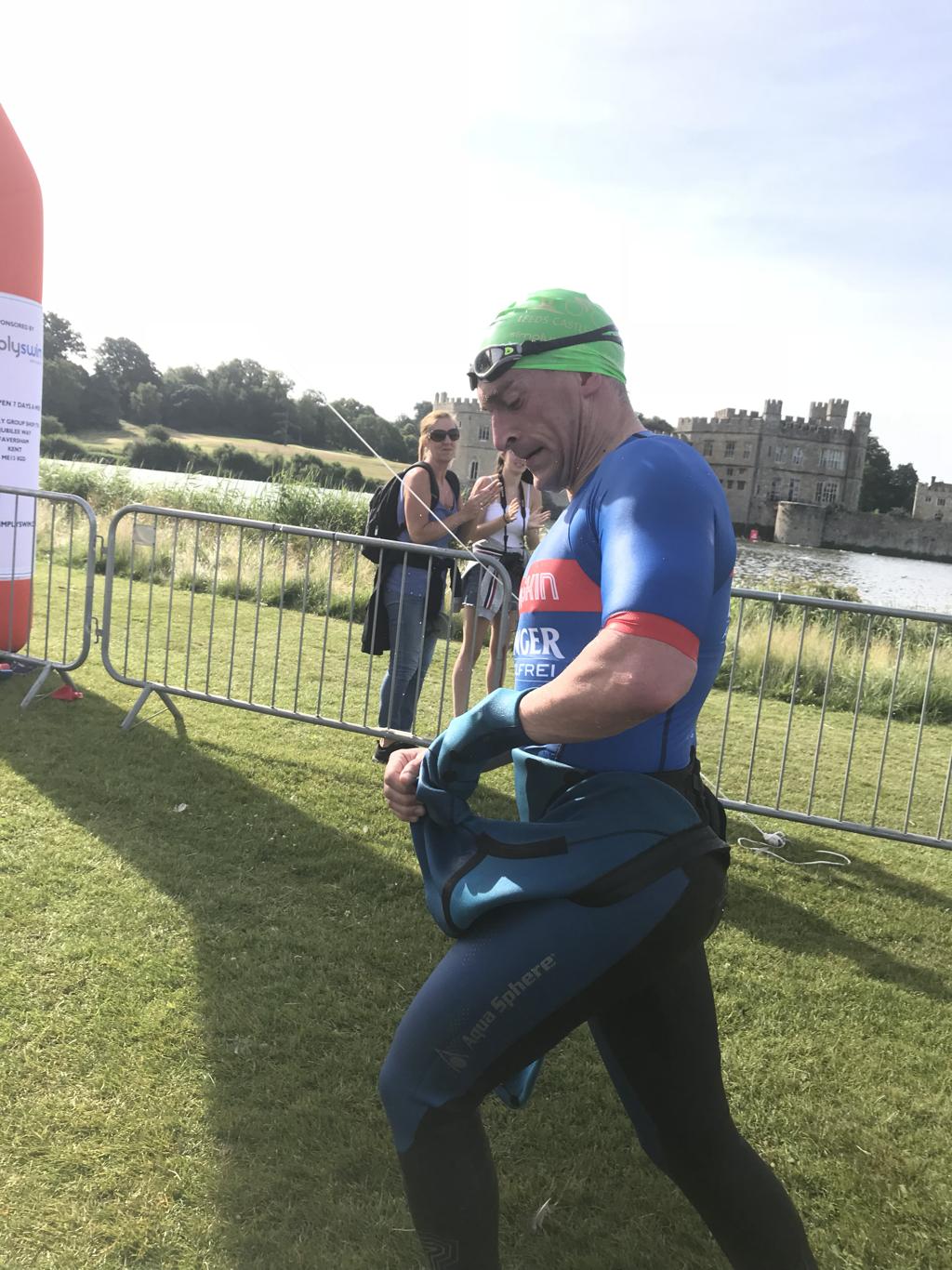 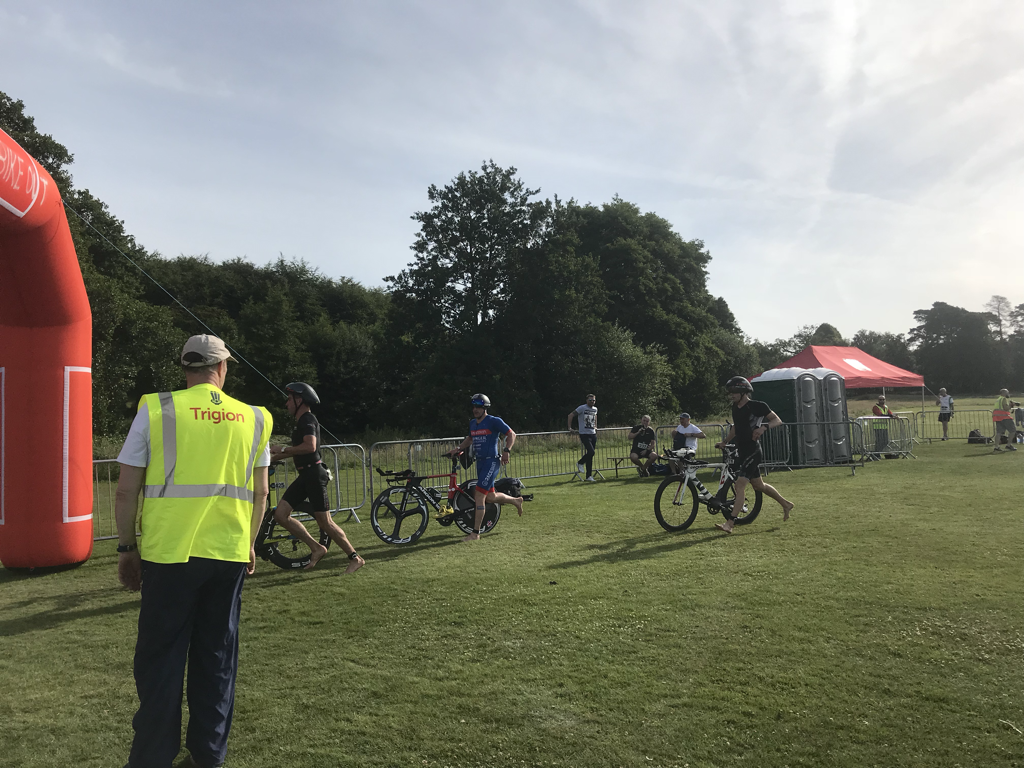 Another quick transition and out onto the bike. A new route this year that was forced with deviation due to carriageway roadworks, made the usual out and back a little more interesting and challenging. An addition I feel should be a permanent fixture for this race in the future. I settled into my rhythm. Extended to 45km, a 1hr 11 min split averaging 38kph rocketed me into 2nd position on the road! 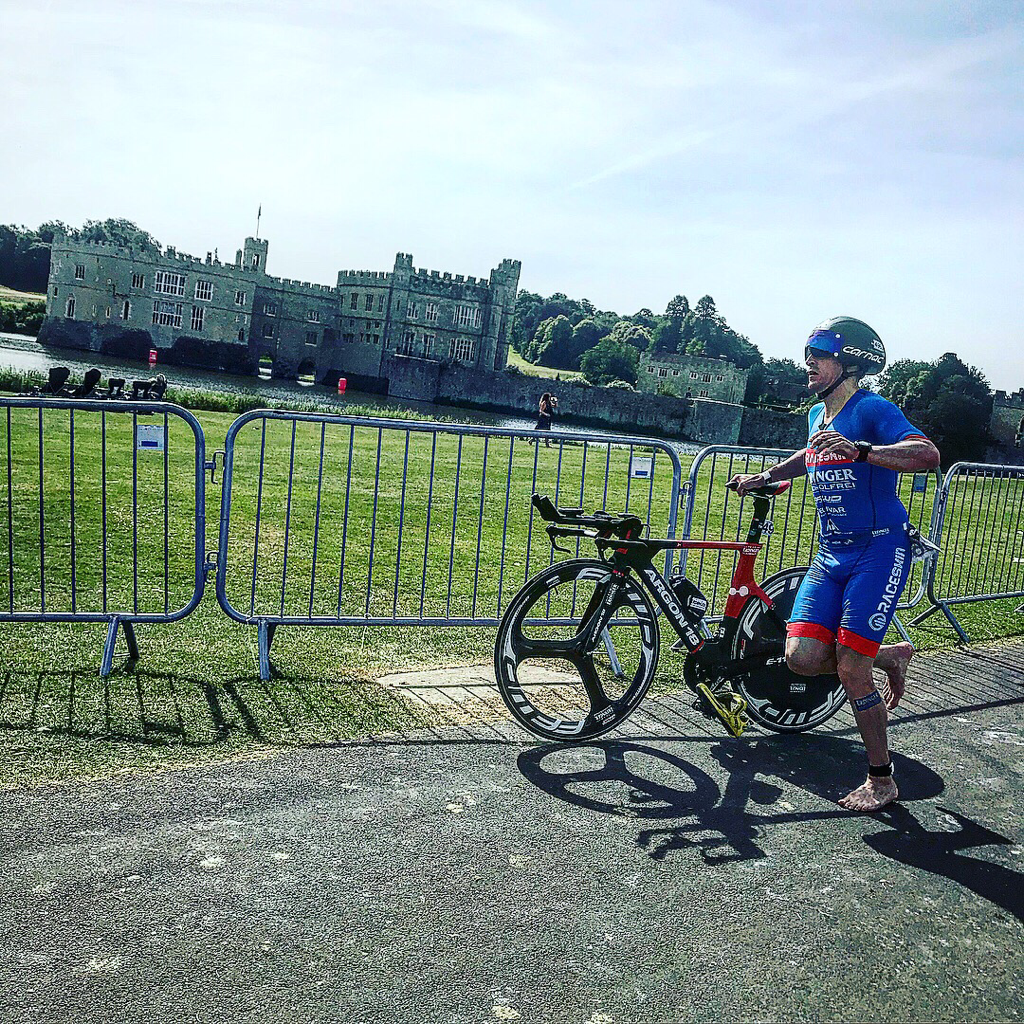 It was left to a brutal 2 lap 10km off road run which resembled a crocodiles mouth, gaining some 185m of steep climbing in soaring heat. I settled well, and with a number of water stations on each lap, the opportunity to take two cups, drink one wear one, was enough to stay cool. Mark Firth passed me in the opposite direction as he left and I joined the turnaround straight. I knew I was running well! No one had passed me I was holding my own. I just needed to survive the final three miles which were becoming congested by now, but all the same, welcome relief to pace off people as I picked them off counting down the kilometres to home. 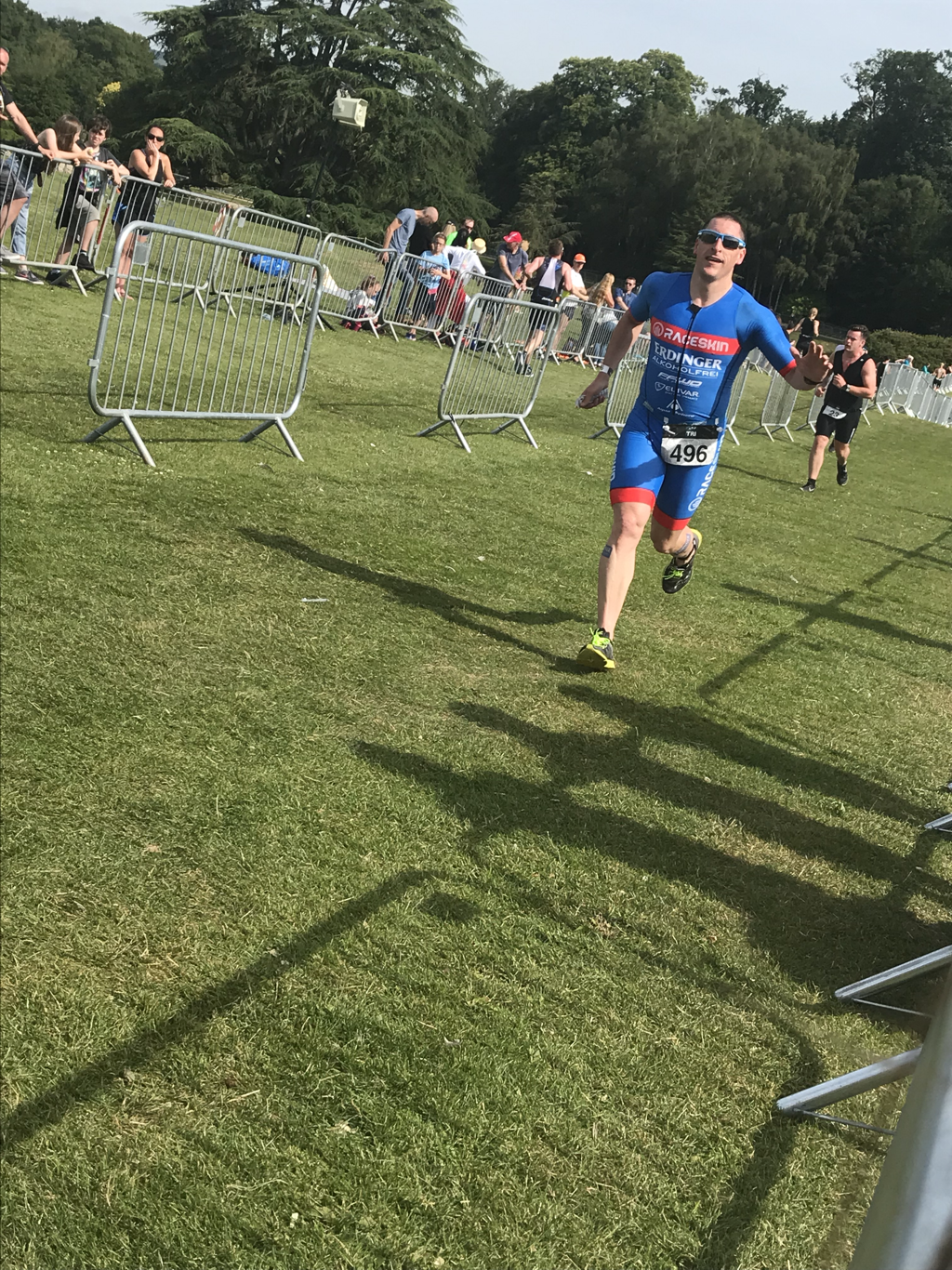 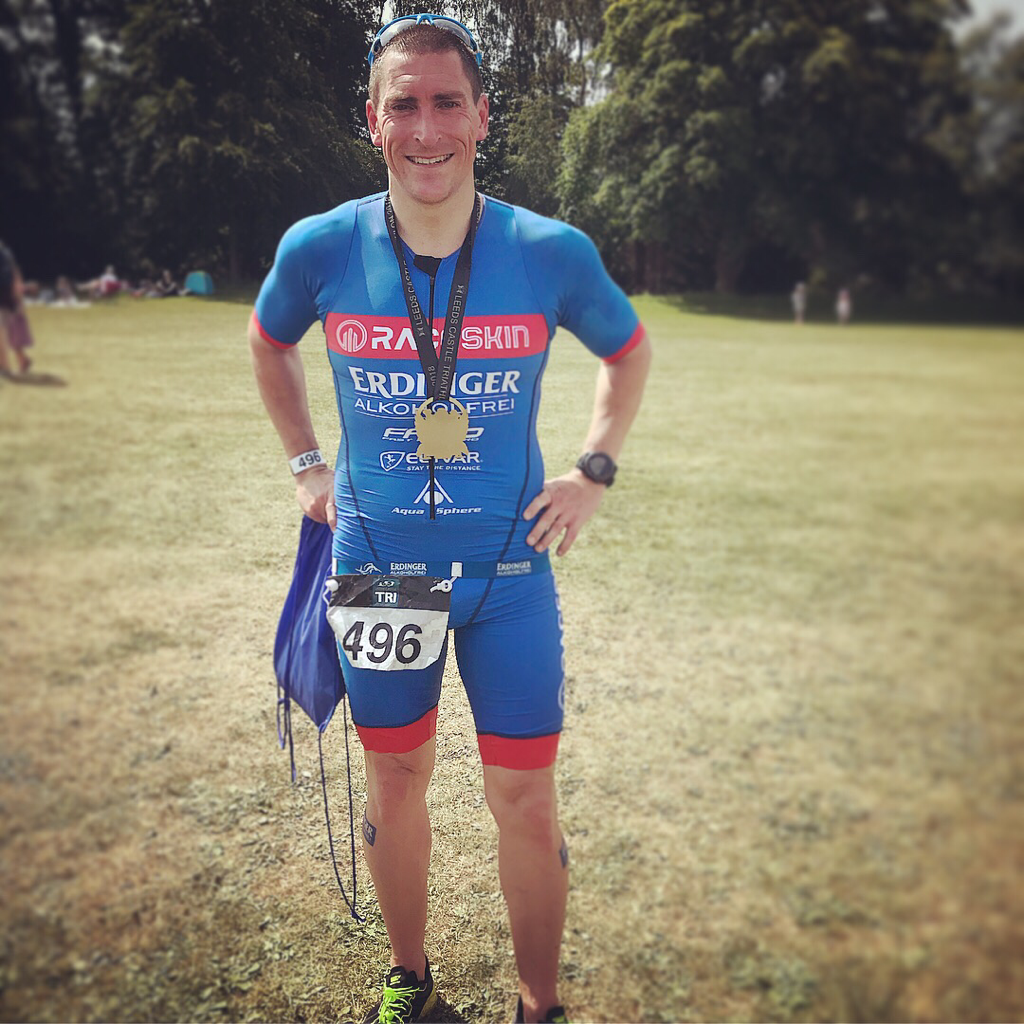 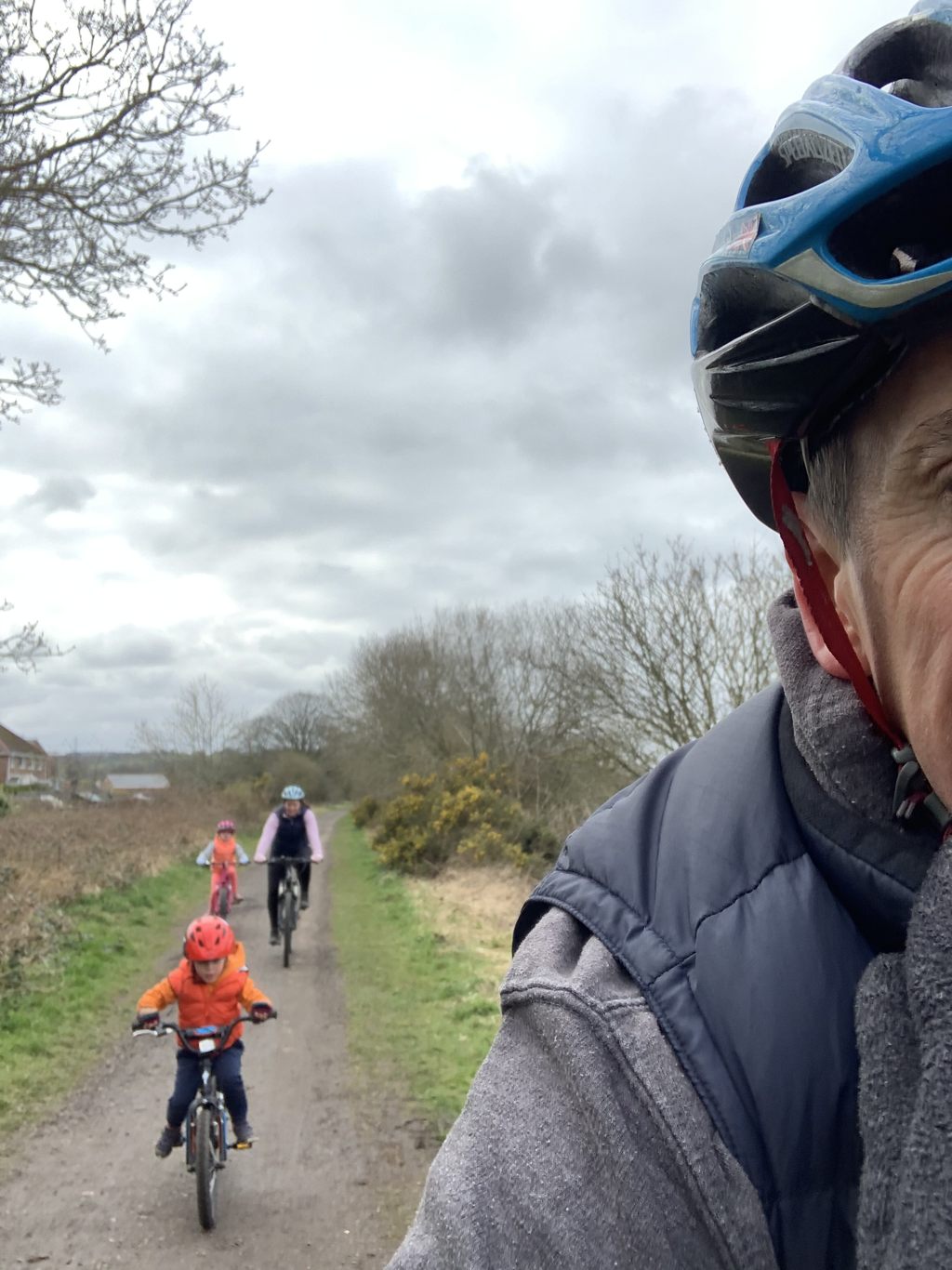 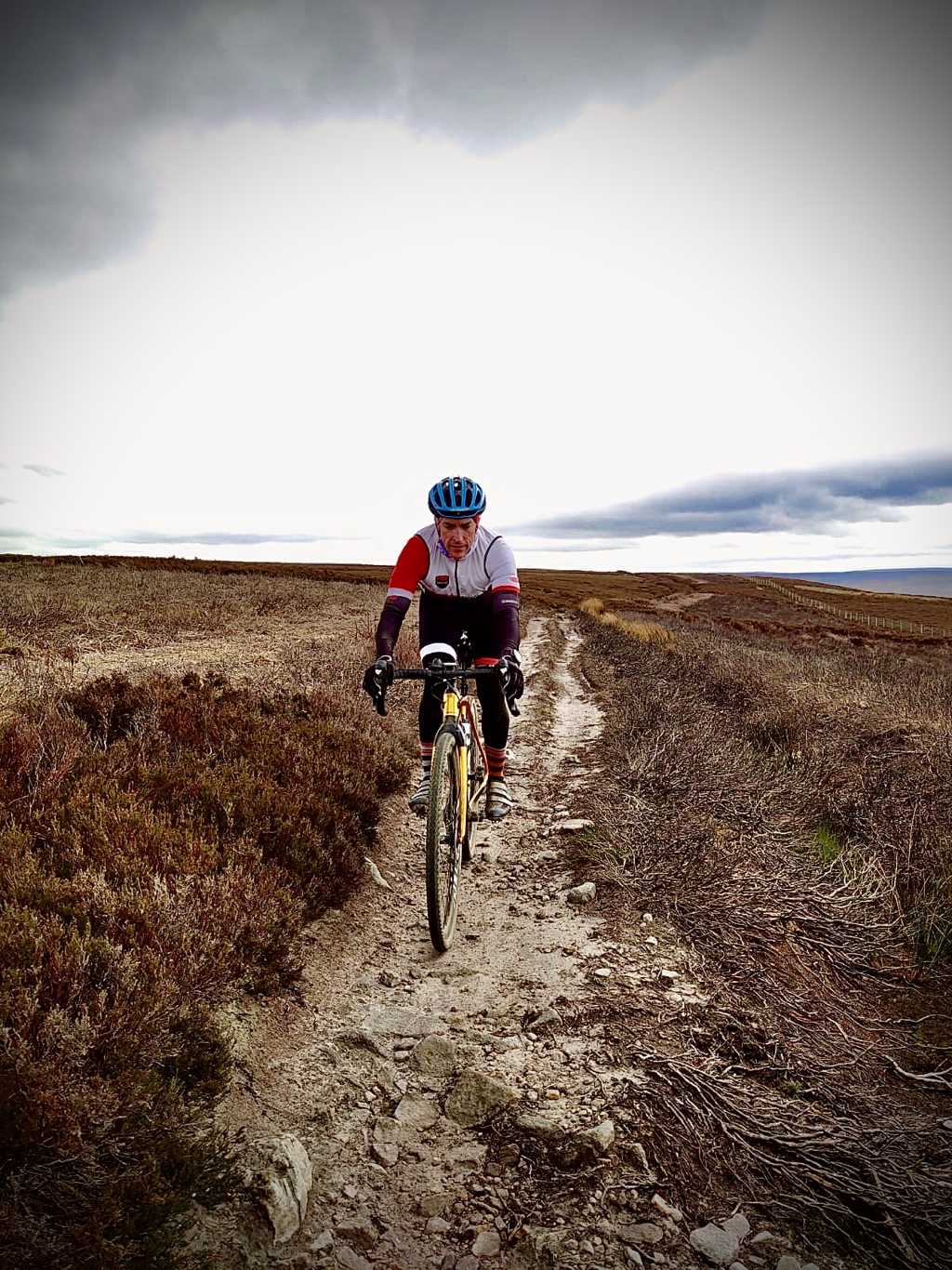 Now ready for a mid season week break crossing the channel with the family to enjoy some sunshine, food, drink, waterparks, and runs for fun in North France. 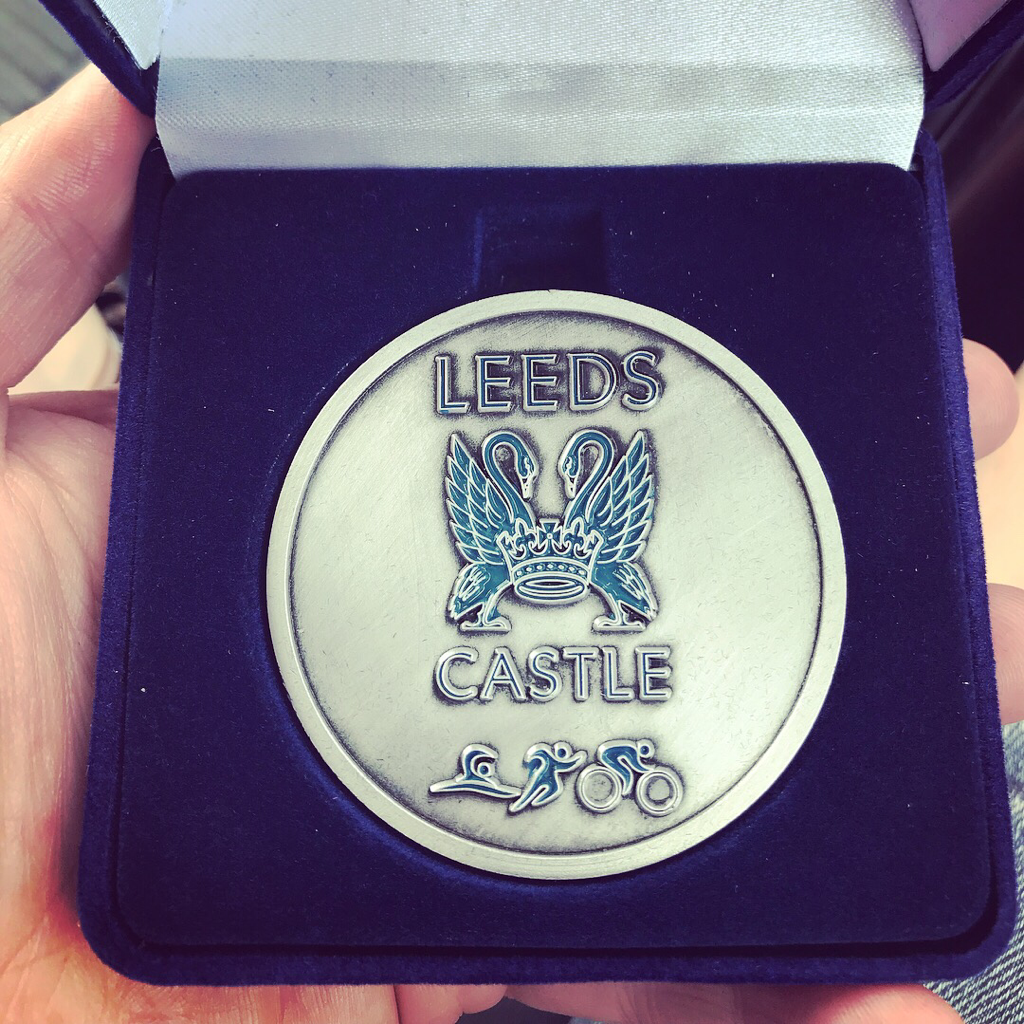 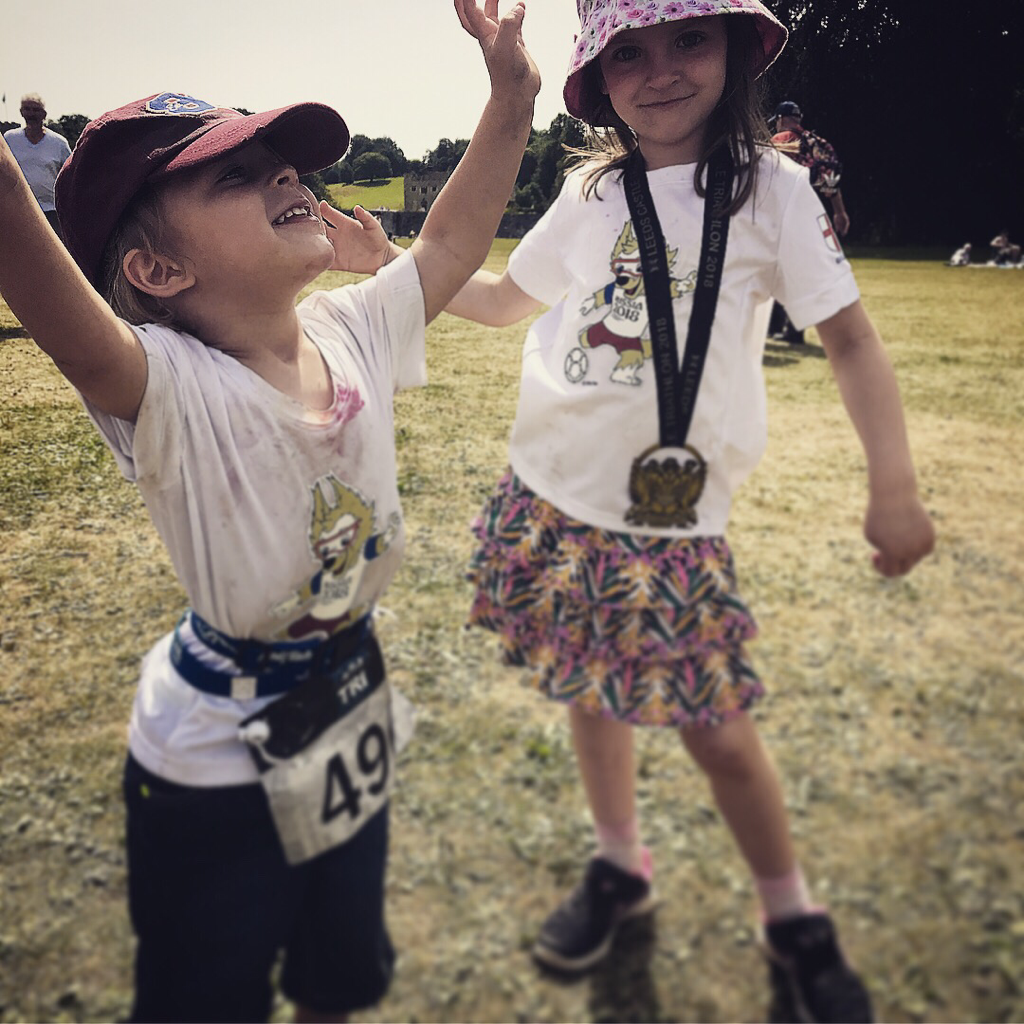 Arriving back into the UK on Friday morning we were faced with the long journey back up to home in the North East. A bit of a rush turnaround to prepare for Ripon Standard tri on Saturday. A race that was scheduled for fun, to join my club mates from Coalfields Tri Club, I was grateful for the afternoon start at 13:00pm. This posed new challenges.....


..... After enjoying the sun and coastal breezes in northern France, inland North Yorkshire had been toasting very nicely. The water temperatures were soaring to boiling point and there was no escaping the fact that this was going to test me as the week before had failed to do so.

We were all in the same boat. I’m sure it be safe to say we were all in hot water and eager to start. That eager intact that I’d got myself caught up in a false start, burning my matches for 200m before we were pulled back to start again. 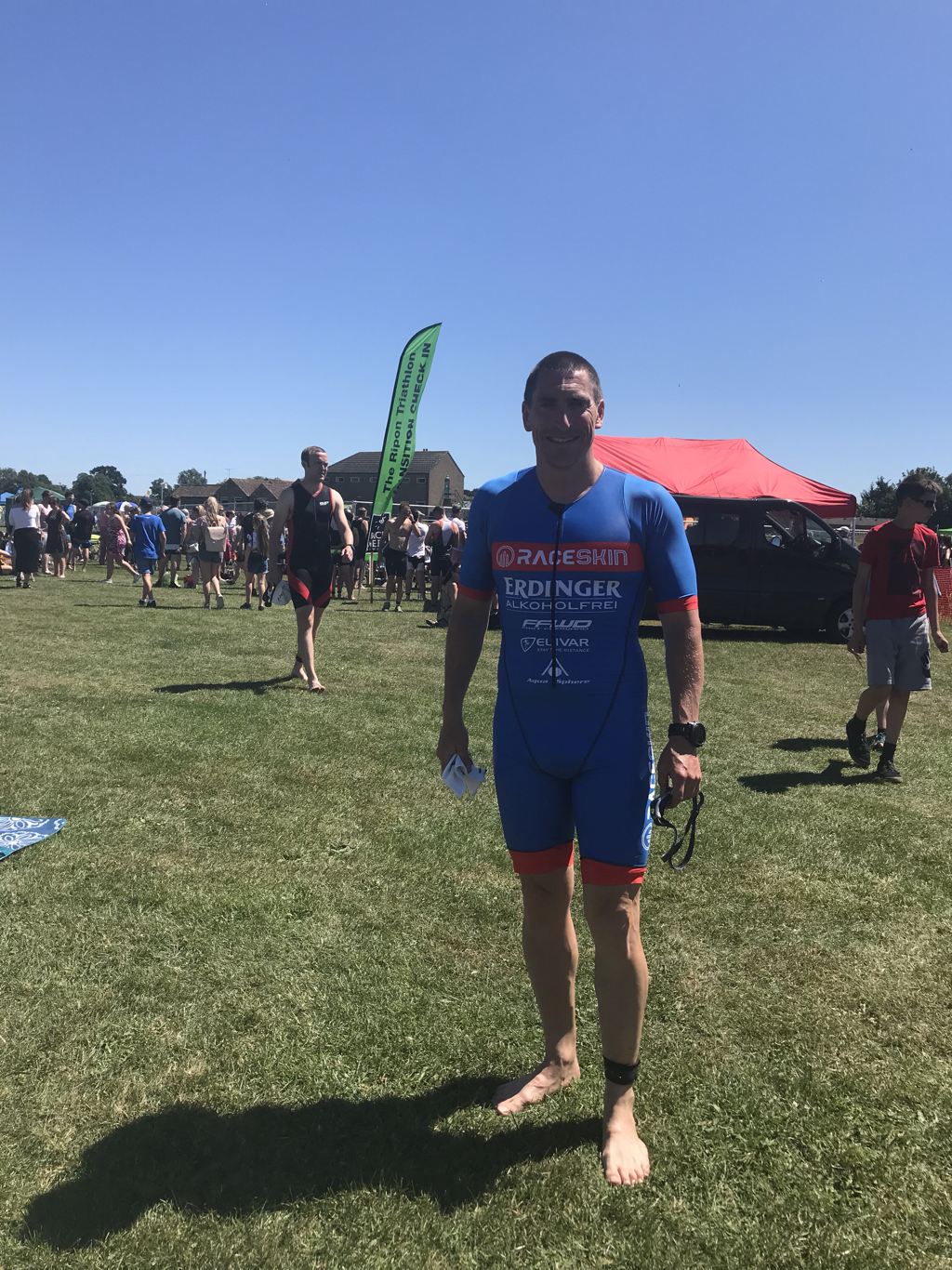 Take two and we were cleanly away! Immediately the pace was high but I’d not made the same mistake as the week before. I was on good feet and getting dragged along by the front group until the turnaround at the top of the lake! I was having a great swim and as I was starting to fade fresh feet provided immediate relief to latch on to and bring me home out of the water in 15th place at the head of what was the second group and 5th in my vets category. 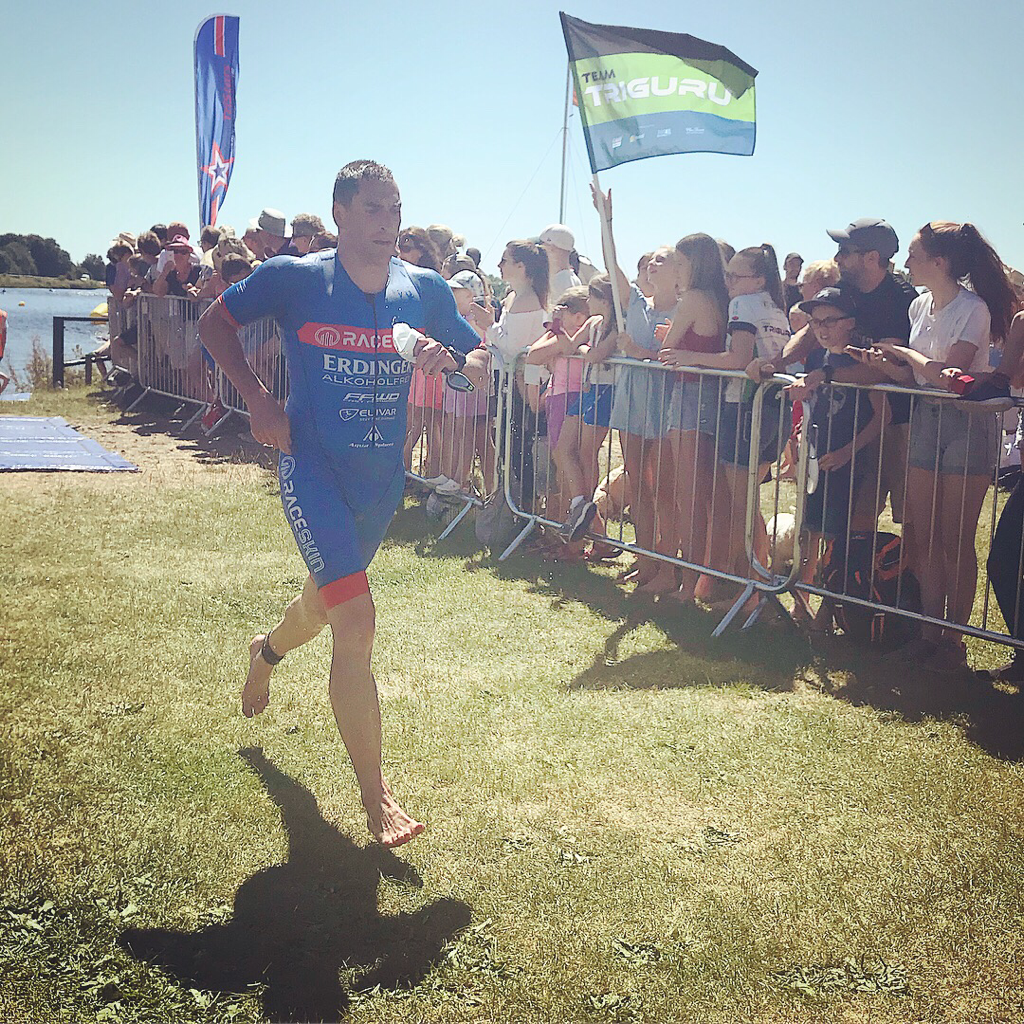 Another new bike course for me which has differed from previous years made it a more honest cyclists course and played to my advantage. I was happily picking off the slower cyclists and found myself riding up into 4th overall on the road! All that remained was a scorching 10km run. I didn’t really get started and was feeling tired in the heat! Made longer as I dodged into the shadows of hedgerows to keep the sun off my head it felt like it was 30 degrees with little to no wind to cool down. 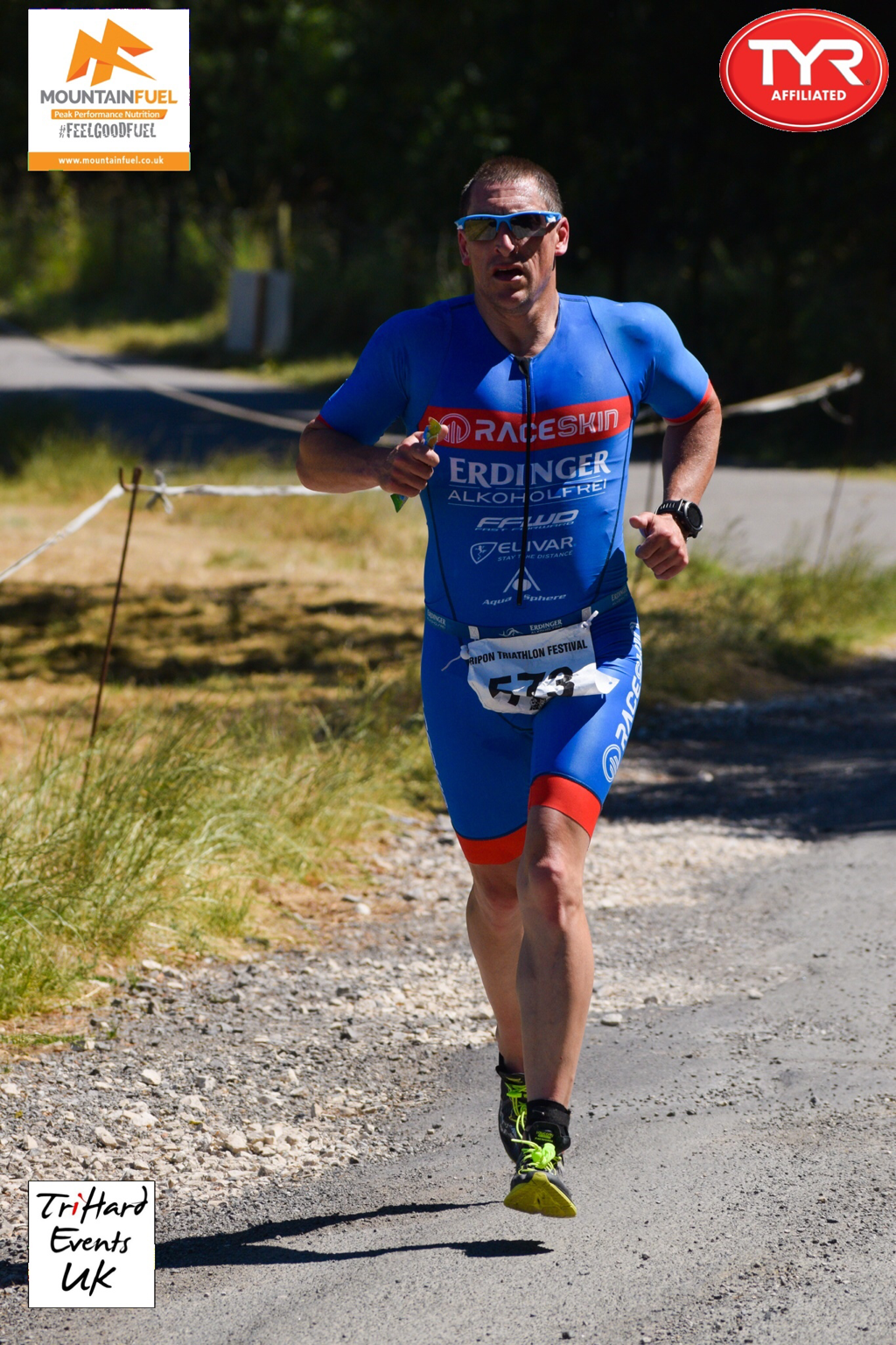 Although I wasn’t running fast, many others were again in the same boat. My run of 41 minutes, which should be closer to 37 saw me drop 3 places, the last of which about 800m out left me with no answers at all. Carried over the line into 7th Overall, for what had been a very solid field of top athletes, I’d not given myself any pressure following a week of excesses on a family holiday. Surprised me immensely going into a good fortnight of training and confidence leading up to the British Sprint Champs in Northumberland in two weeks time. 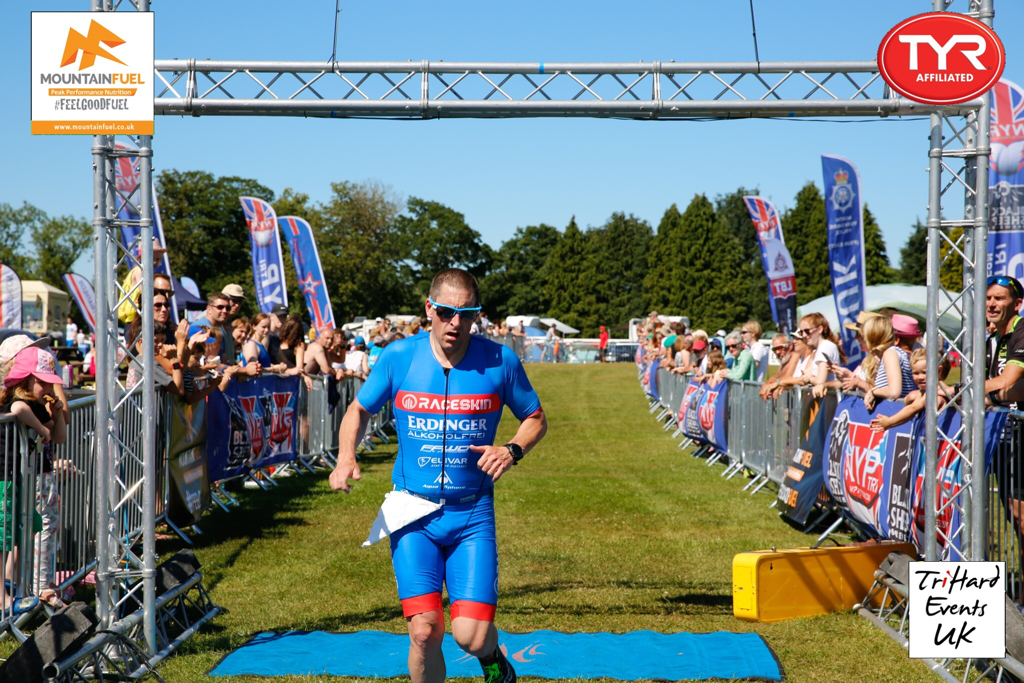 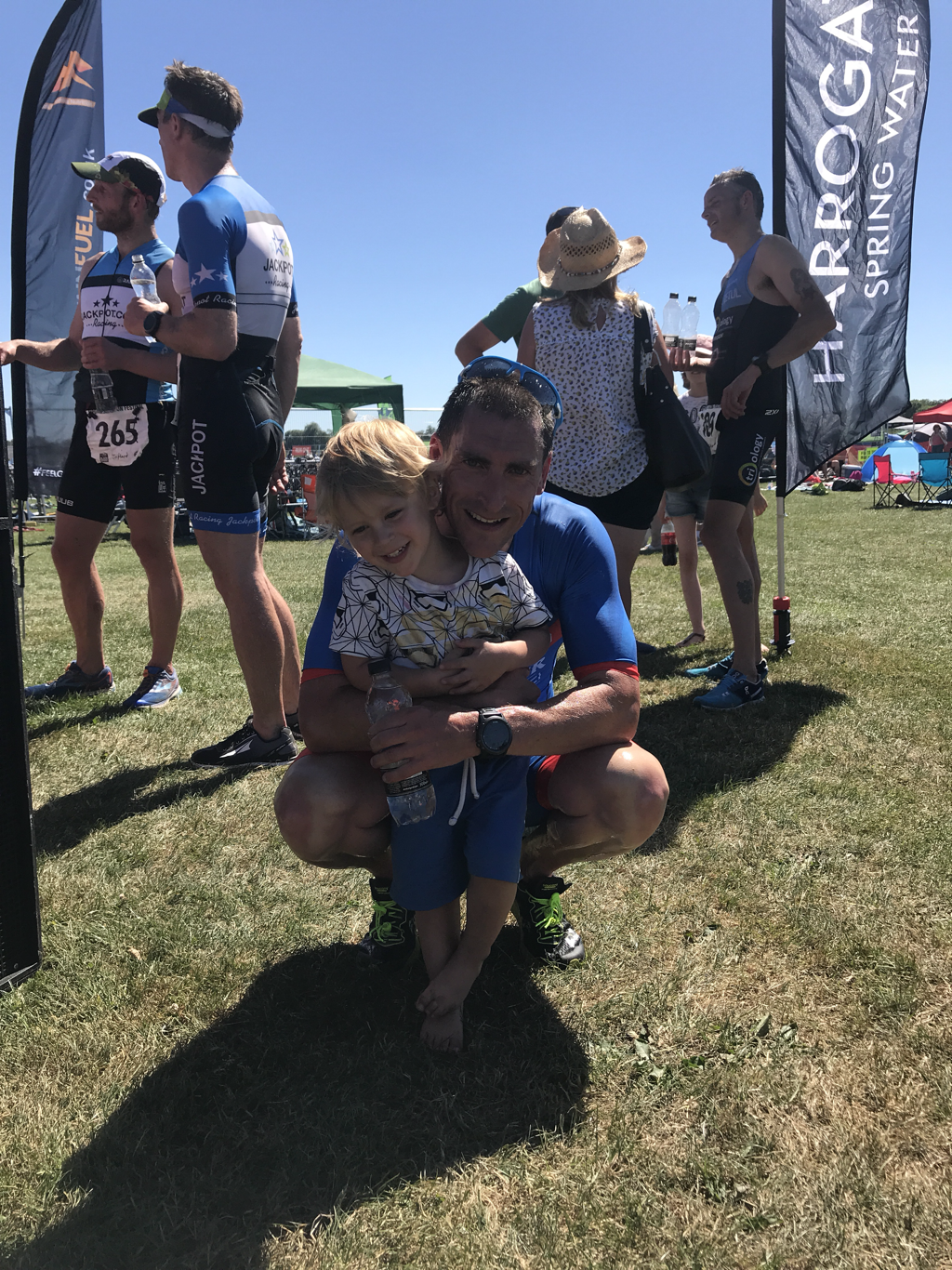 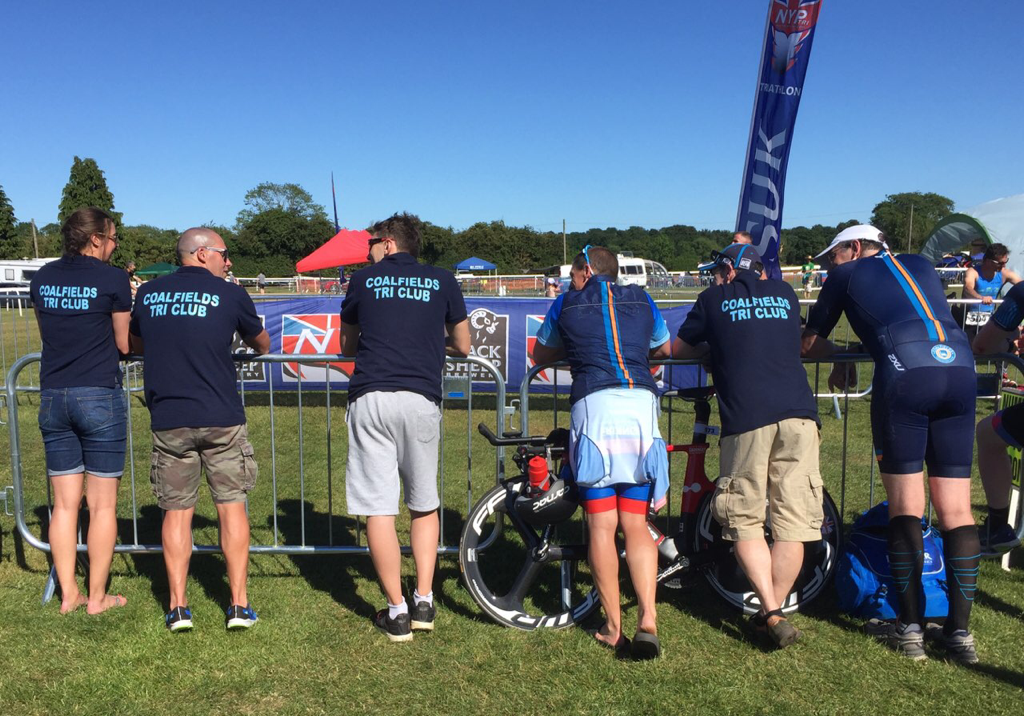 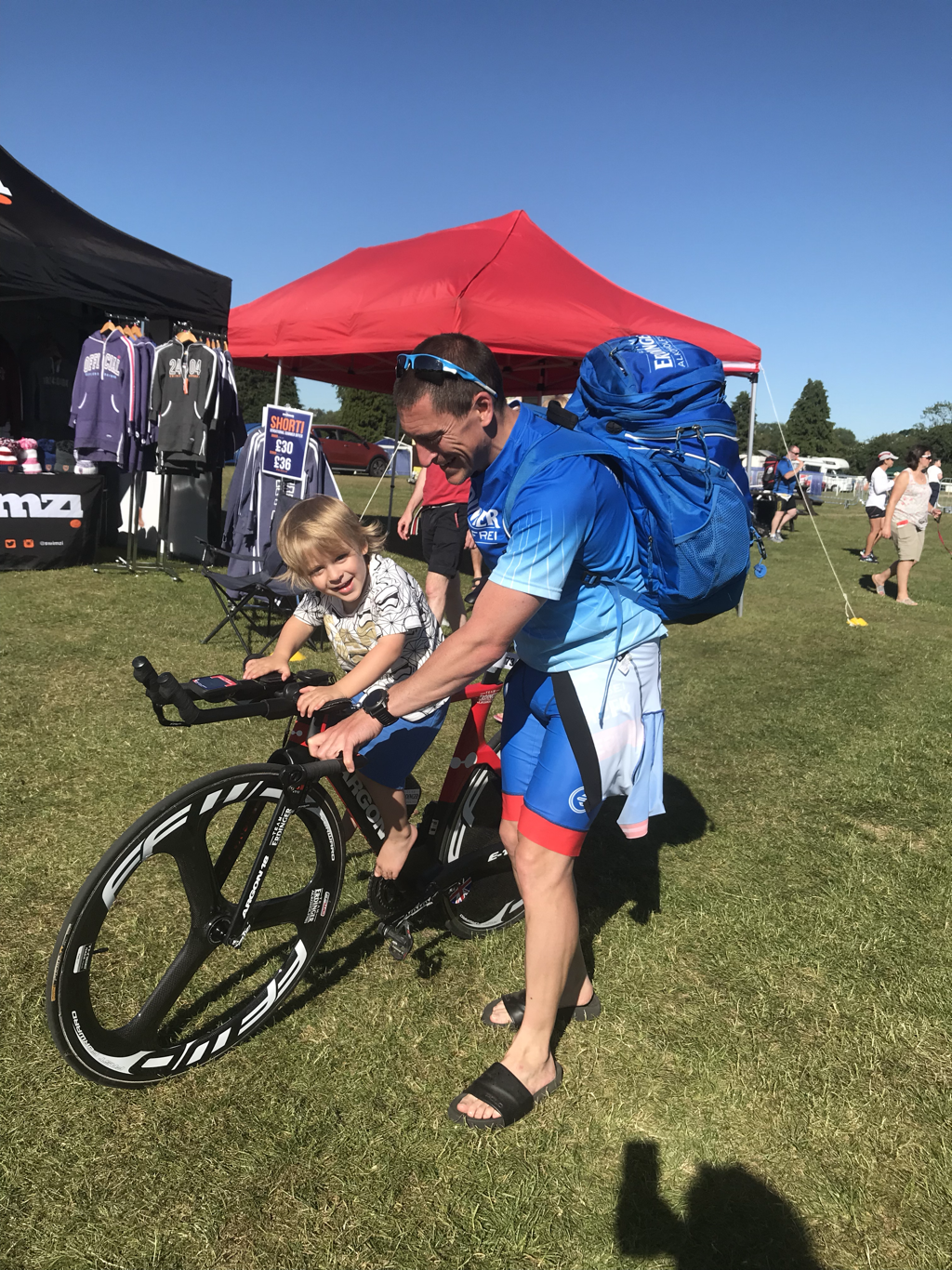 As always I’m thankful for all the support Charlotte and the kids give me. From the rest of my family and friends it is always appreciated.

Elliot, I said it last week, you’ve been a great help certainly having confidence in me and supporting me back to where I am and Performing well. Thanks a million.

The last couple of weeks my races have been made back on the bike again. Riding strong and riding on my super fast Fast Forward wheels. Wheels and a bike that only fill me with confidence more and more every time I ride on them. #GetConfident #GoFast

All the support from Team ERDINGER Alkoholfrei being inspired by all your performances makes me proud to be part of such a team.

Elivar Sports Nutrition keeping me fuelled and hydrated and Aquasphere for keeping me confident in the water.

As for the new RaceSkin race suit, absolutely fantastic! For both races it felt super comfortable and quick. In the non wetsuit swim? I had one of the best swims I’ve ever had!!! 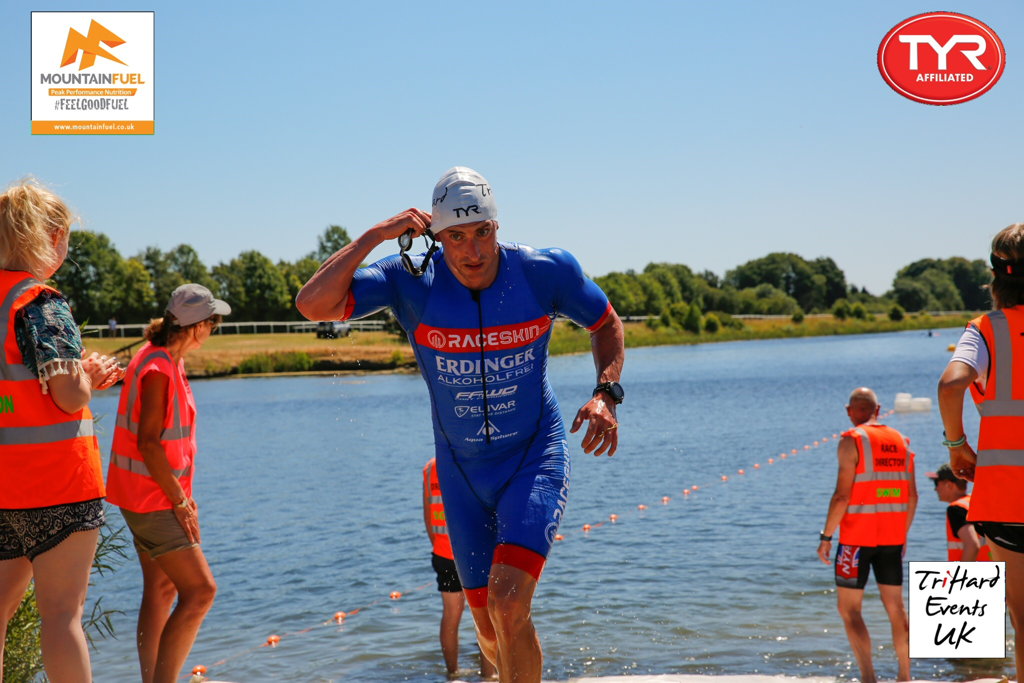