My husband, Stephen, has a biathlon background and decided he would give the Northumberland sprint a go in May 2014. In my unique way of not being able to see green cheese, I signed up for the Bamburgh sprint, 7 weeks later and didn't even have a bike. Indeed, I had not even been on a bike for about 10 years so I knew it would be 'fun'. I have worked particularly hard on my swimming for the past 4 years and although I am not quick, I have maintained a pace and have felt stronger in the water as the years have gone on. Similarly, my bike is pretty average but again I have worked hard on the turbo and got out into 'the hills' whenever I could find a few hours. I have enjoyed being dragged around the pool and the hills by some of Coalfield's finest and am very grateful to them for letting me use their drag in real terms. If I was ever anything, I was a runner so I have tried to maintain a standard but feel that this is an area I need to work on next, as the other two were in such desperate need of attention I have probably neglected my running style and fitness. And so to the day of the race, as the day approached it became obvious that it was going to be a scorcher.

Non-wetsuit was bandied about by the race organiser and even if we could wear the full wetsuit, I had struggled with cramp during the 10km great North swim, 3 weeks earlier so I went in search of a suitable alternative. I managed to get hold of a swim run short wetsuit and as is my style, I was in for a penny in for a hundred pounds and went for it. I will never know if the lack of buoyancy slowed me down much but I am fairly sure that staying cool played a massive part in my finishing a very tough race for me. The swim was 8 laps of the Arrow Valley lake and took me in a very strange 3 points of a star shape. I cannot swim in a straight line, as my husband reminded me on the first two laps but I was holding my own and my pacing was good at around 35 minutes average per 1400 metre lap. I was sure to fuel and hydrate every lap and this, again proved vital as the day wore on. Each lap provided it's own challenges(not just the swimming in a straight line ones). First few were about setting my pace and focussing on relaxing my legs and ankles to avoid cramp. Next few were about stretching out my stroke and keeping on top of the mind numbing boredom that can come with nearly 5 hours in the water, not communicating with anyone except at the fuelling point. I will be forever grateful to the marshall who told me what a good job I was doing every lap and even though I didn't believe him, little things like that from all the marshalls really made the race a better experience. As the final lap approached I began to mentally prepare myself for the bike leg....who am I kidding?

I basically gave up on the idea of doing the bike leg about 20 times, but nonetheless I duly got out of the water, was helped out of the wetsuit and prepared myself to do it anyway. The 4 lap bike course was a challenging one, not in it's terrain which was mostly dual carriageway way with slight inclines on the way out and declines on the way back and a bit of a hilly country middle. The real challenge was the heat of the day and the wind which was very warm and often across or head on. I am not a good drinker on the bike, in truth there is little I do well on the bike-ask my husband again, who has his heart in his mouth when I signal/swerve. I did OK, in that I got through 4 bottles on the bike but I probably should have got through 8. After every drink my mouth felt dry within 5 minutes. The dual carriageway stretches were brutally hot and windy and there wasn't much reprieve in the countryside either. Cramp set in on my final lap of the bike and again I doubted if I would even start the run and said as much to Stephen when I got in off the bike.

I changed my clothes and reapplied suncream on to my red raw shoulders and off I went onto the run course which was again 4 laps around the park and surrounding suburbs, I took on fuel and particularly salt at the first feed stations but I have to say the first lap felt dreadful and I wasn't happy with my pacing or form at all. Second lap was much better and I happened upon a nice guy who was doing a whole load of crazy challenges this year to raise money for a stillborn charity that had helped his family when his grandson was stillborn in 2014. Probably, the main reason I like the running part of the triathlon is you get to have some chat with the other participants, I ran with Scooby Doo(because that's the costume he was wearing in 27 degree heat) for his 3rd lap and my 2nd plus some of his last. Once he saw the end was in sight, he was away, but I saw him with about 500 metres to go of my marathon and he was a welcome sight. Third lap was pretty slow and it was still very hot. The crowds had thinned out a lot by this point and I was spending more and more time running on my own as dusk approached. The race organiser was pootling on his bike when I was about half way around my third lap and it was good to have a word with him and know that he appreciated how tough it was for us but had full faith that we could do it.

I had seen Stephen about 7pm and knew it would be at least another couple of hours before I would finish. It had been a long day for him too so I assured him that he could go back to the place we were staying with our kids and them come back for me later. The last lap was the loneliest but also the most uplifting for a number of reasons, first I had a few more chats with fellow runners which gave me a much needed boost, I saw my run Marshall who had encouraged me throughout the afternoon and evening and on the final 5 km he chased after me for a high 5. There was a marshall with his two young daughters who were also keen high five-ers and they also gave me a little supercharge at two checkpoints.

The final lift came with about 750 metres to go when I heard the shout of 'go on mammy/Clare' and there were my team, who had stayed to the bitter end of my Everest challenge and ran beside me for a couple of hundred metres before running off to the finish line for the obligatory pictures.

As I crossed the line at 9.35pm, 14.5 hours after setting off on the 7 mile swim, all I felt was relief to be done but as the magnitude of what I had done took hold I began to feel elated and immensely proud of my achievement.

It is a huge mental challenge, as anyone who has done an endurance event will attest to but the reward is in the sense of achievement. However, I can say with 100% certainty, that I would not have been able to do it without the support of my team plus the countless words of encouragement as I tackled each part of the race, from the jetty marshall who lied about how well I was doing, to the cycling marshall who gave me a wipe for my sticky hands and a bottle of water and finally the running marshall who threw a sponge at me when I needed it.

I cannot say that I will ever do this particular race again but I know that I will continue to look for challenges that will cause me to question my own sanity a thousand times during it. Thanks for reading if you still are and remember to always do the thing that makes you feel a bit stronger than you actually are. 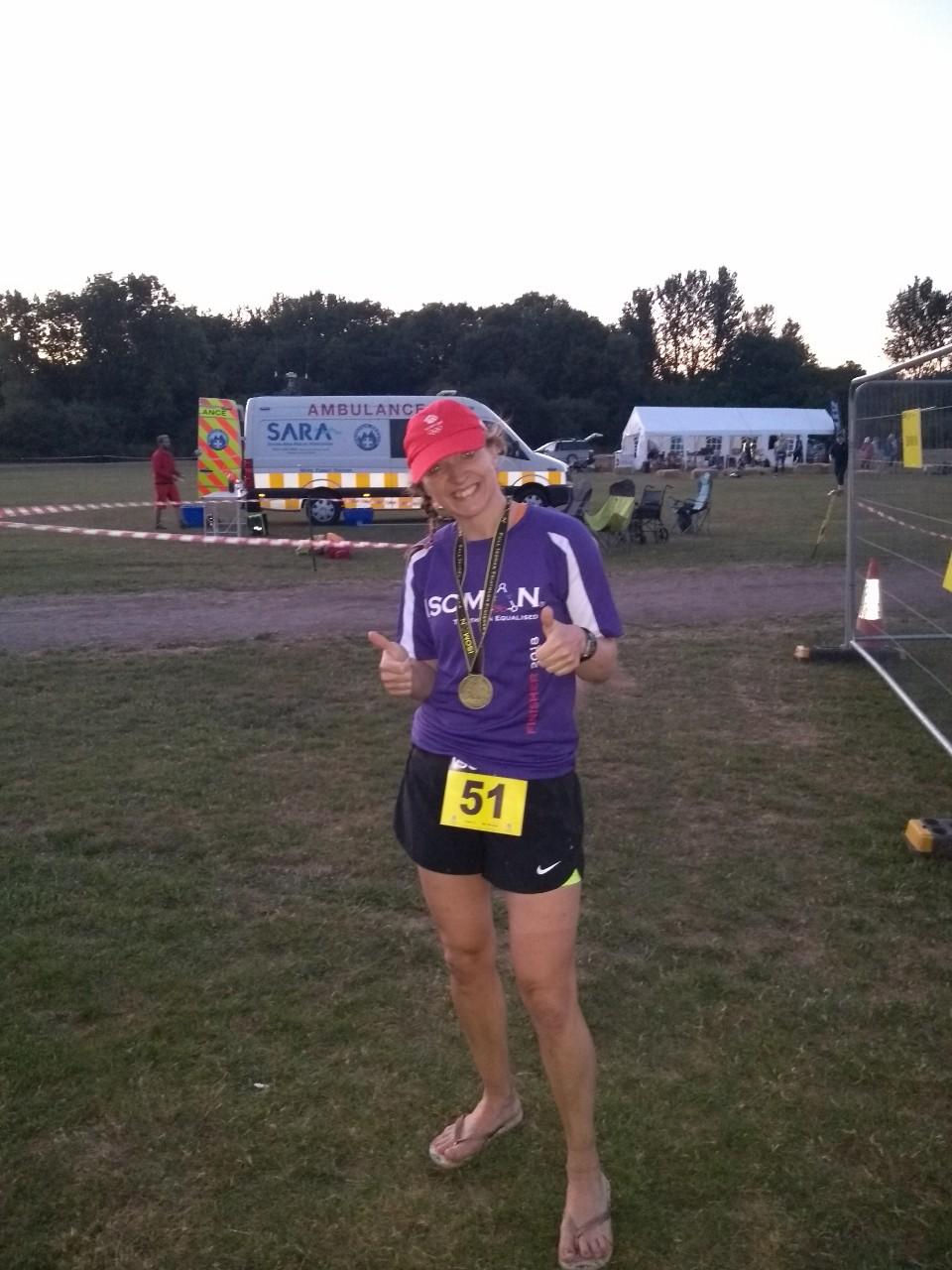