As race day approached talk of the marathon turned to talk of the weather with record highs predicted for race day. A stark contrast to my training during the coldest and wettest winter in a few years.

As race day approached talk of the marathon turned to talk of the weather with record highs predicted for race day. A stark contrast to my training during the coldest and wettest winter in a few years.

I arrived in London on Friday with my little sister Linda to glorious blue skies. Beautiful weather for sightseeing but definitely not my ideal running conditions. I am going to put this out there early, I am NOT GOOD at running in the heat. I do not regulate my temperature well and I can produce copious amounts of really salty sweat.

I am not a novice endurance athlete and I have made many rookie errors over the years with regards to hydration, pacing and nutrition and this time I was determined to get it all right.

Off to the expo we went to register. This I can only explain was the most seamless registration ever, no crowds just straight in number collected and job done. Whole process took about 3minutes. Into the expo to spend a few pounds - most definitely the largest expo of any event I have done to-date. You could spend all day there but the sunshine was beckoning. The return journey we made an adventure choosing the less direct option of a cable car and a boat trip - much better than the tube.

A quick training run on Saturday gave me an indication of just how hot it was - the verdict- very very hot. Not to panic the race day weather prediction had changed to sunny in the morning with clouds by midday and rain showers in the afternoon. With a 10am start and a predicted time of 4 hours plus maybe it wouldn’t be so bad.

The race has 3 starts which merge by mile 3. I had blue start at Blackheath. Race day travel information was as good as the registration. I was expecting hot over crowded trains (circa GNR experience 2008). In reality- London transport excelled itself yet again, seamless travel in comfort and no stress. The start beckoned.

Blackheath is huge, the start was brilliant, baggage trucks clearly marked, more toilets than I have ever seen in one place and this was just 1 of 3 starts. The music was pumping, the big screen was up, the compare doing a great job of keeping the atmosphere fun. No place for nerves here, it’s fun all the way.....except no shade!

The only negative of the organisation. Each start had 8 pens depending on your predicted start time. I was pen 8, i.e the back. By the time I walked to the pen you could no longer hear the music or see the screen. I only knew the race had started when I checked my watch and saw 10:02 - sadly I missed the queen.

This year they started the race in waves to reduce the crowding. This meant I didn’t cross the start line until 10:40 so that was at least an hour of standing in the pen in the sun without shade or water, less than ideal. Never mind onwards and upwards. We were running.

Once you get to the start you are met with a wall of noise from the crowd and volunteers, something I was to get used to, there was to be no respite from the noise.

I was prepared for a slow busy start but instead found myself with open tarmac immediately. I initially felt quite sluggish with people whizzing past me but a quick glance at my watch told me to ease off as I was way over race pace.  So I settled down and off I went, except  I realised I had been so diligent with my hydration I needed a wee, dam it, all the toilets on route had a queue. I put the thought to the back of my mind and settled into a comfortable pace. The first few miles ticked by so fast, 5km is the first water station and there was to be one every mile after that. 1st a few swigs  as I’d not drank for over an hour in the pen, the rest over my neck - glorious. And so I had started as I was to continue with a day of drinking and dousing myself.

By approx mile 5 my effort level was going up and my pace was slowing, as was everyone around me. It was getting towards midday and I was incredibly hot. I had so much water poured over me it was running down the back of my legs from my shorts. I needed to cool down - cue a strategic toilet stop with a queue in the shade. Garmin paused but chip time would suggest this one and only stop was to take almost 10mins. A small sacrifice to reset my core temperature and empty my now busting bladder.

Off I go again feeling a little better but fully aware of the rising temperature, where were those promised midday clouds?

By mile 9 my pace was slowing again and my effort levels rising. It was becoming increasingly more difficult to run at a steady pace, it was so busy and felt like 5 steps forwards and two to the side. Each water station caused a slowing of the pace. At this point I realised a good time was not possible and actually the heat was making it so much harder than it should have been for the pace I was setting. This was hard to take, my training had not been as consistent as I would have liked but I had still trained hard and felt cheated that I was working so hard and suffering so early in the run but wasn’t going to get the reward of a good time. Frustration was high and the constant crowd noise was starting to irritate. I wanted time out, some peace and quite to regroup and compose myself. Well that was not going to happen. So I remembered the advice Linda had given me having run the marathon twice - “ don’t forget to Lift your head and take it all in” great advice Linda. Time to relax stop trying to force the pace, accept it and enjoy it.

Next up was tower bridge, now I was determined to take this bit all in. I was having a little slump so as I turned the corner to deafening noise I saw the bridge, I pulled over scoffed some fruit pastilles and a salt tablet and over the bridge I went - it was awesome

Mile 13 passes the runners in front going the other way. We had a small amount of shade but the faster runners did not, I looked over and they all looked pretty dreadful, I thought I am not looking forward to that part!

Onwards we trundled, mile 16- 19 was a tale of highs and lows, when shade was available I perked up, when there was no shade I wilted like a flower. The crowds were definitely not fading. They were just as numerous having a great time in the sunshine with beer and wine offering sweets and drinks. One lady was In Her bikini with a microphone yelling encouragement - oh what I would have given to be a spectator at that point.

As we turned a corner I looked up and realised I was at mile 22, I glanced over to the other side of the road to see the sweeper bus going the other way with a handful of runners - my heart went out to them, 4hours in and they were only half way. One of them was a lady walking with a crutch I had seen at the start. Once again I found myself grateful to be where I was.

Mile 23 is the glorious sight of the Tower of London, you’ve made it by this point, only 5km to go. The road widens to make running a little easier and the crowd managed to raise the noise level even higher, I mean just Wow it was deafening, unbelievable noise, never have I heard a crowd like it. I’ve ran numerous  races but this was another level. It hurt so much by this point but no way was I walking or slowing down, the crowds just wouldn’t let you, if they were making the effort then so was I.

Buckingham palace was in sight and I could see a bottle neck approach, oh no please don’t make me slow down again. But my internal prayers were Answered and as I approached they moved the tape and gave me open road to finish, at last, I could stride out and run the last 300m at my own pace, simply glorious.

The finish was as clockwork as the rest, straight through and as I approached my baggage lorry my bag was in hand waiting for me - outstanding organisation

So my final assessment, I was initially very disappointed to have worked so hard and come away with such a slow time, but on reflection I didn’t feel unwell, I don’t bonk, I didn’t get cramp. Whilst the heat undoubtedly had a negative effect on me I dealt with it to the best of my abilities. I got my hydration and nutrition right and the time was due to factors outside of my control.

If I was to change anything it would have been my attitude to the race. London is unique, it is iconic and is a race as a home nation we can be proud of. The organisation was second to none and the crowds were unreal and I cannot see how they could be bettered. London is not a Pb race, it is an event to enjoy and celebrate.

At the expo Linda and I bought a London marathon water bottle, we joked  on Saturday that I had not earned the right to use it yet. Monday morning I sent her a photo of me wearing my London jumper using my water bottle because I had most definitely earned it

Will I be entering the ballot on Monday .....you betcha

For the record the official temperature was stated as 23.2degrees C -officially the hottest London marathon on record 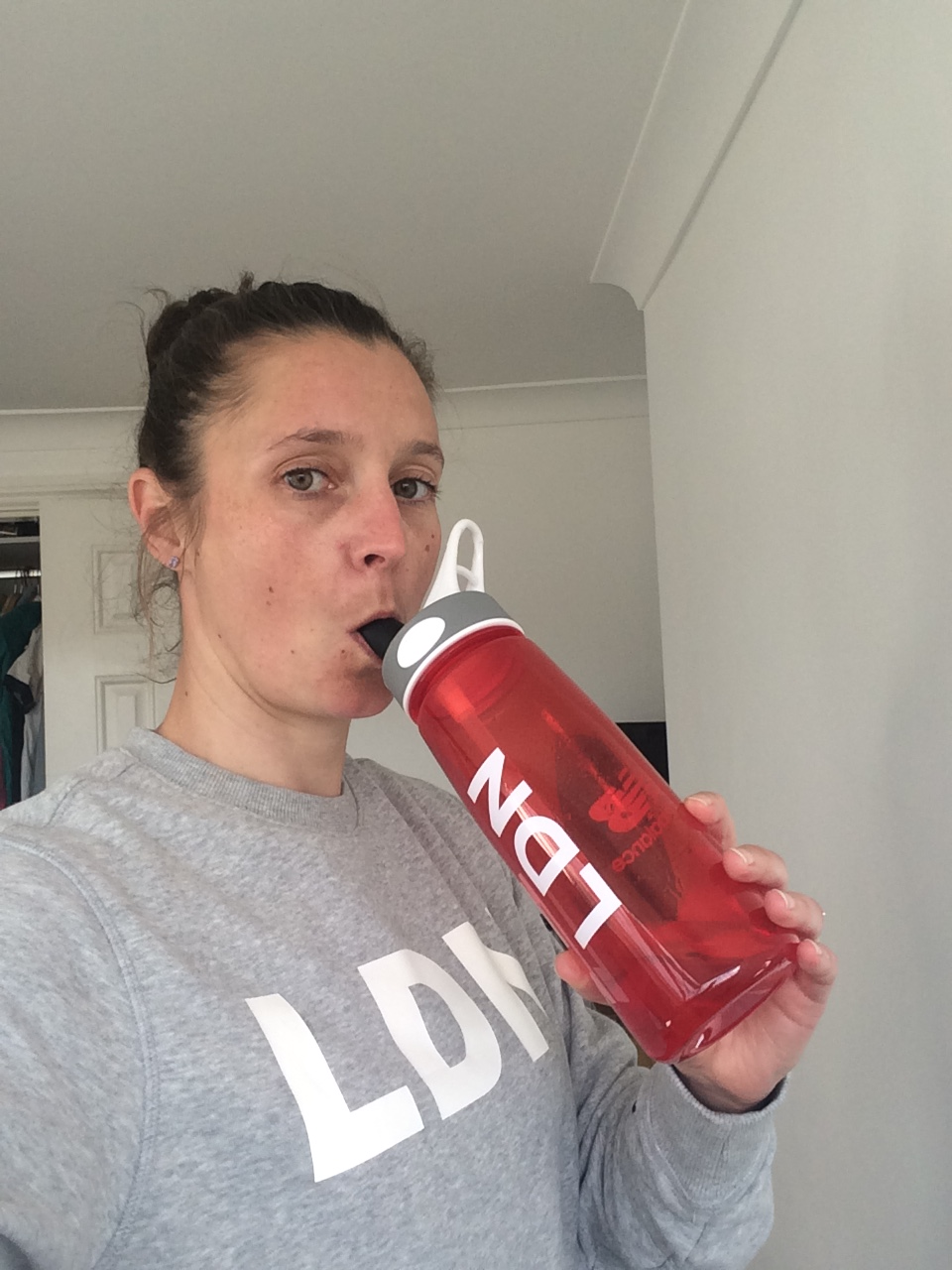